4 1968 Mercury Cougar Has Been Off the Streets for 30 Years, Needs Some TLC

5 1951 Hirohata Mercury Is Up for Grabs, Going For Much More Than the $500 It Once Sold For
Coverstory

Hirohata Merc: The Story of the Most Influential Custom Car Ever Built in the U.S.

Vlad Radu
Not a Mercedes, but a 1950s Mercury Eight coupe, the Hirohata Merc is both a beautiful one-off and the most influential build in the history of American vehicle customization.
17 photos

Ever since the first mass-produced luxury cars hit the streets, some extremely wealthy owners wanted theirs to look even more exclusive, so they would have coachbuilders transform them into unique pieces of automotive art. Decades later, after the conclusion of the Second World War, the dream of personalizing vehicles started to take over the hearts and minds of common people who could now afford to modify their ordinary rides. Nowhere was this trend more popular than in the 1950s U.S. where a multitude of small shops or just passionate owners with a garage, the right set of tools, and a lot of creativity, were building hot rods and customs at a record pace.

While early hot rods were heavily-modified, performance-oriented machines, customs were usually factory-spec models with bodies that were channeled, sectioned, or chopped, and enhanced even further with several visual upgrades taken from other, more upscale cars.

During those years, a Los Angeles-based shop called Barris Kustoms managed to make a name for itself for building some of the most exquisite custom cars in the country. Founded by brothers George and Sam Barris, the garage was the place where the most demanding enthusiasts went to turn their dream into reality.

One of these enthusiasts was Masato “Bob” Hirohata, a young businessman who wanted to transform his Mercury into the most impressive custom ever conceived. In 1952, he went straight to the Barris brothers and assured them that money would not be an issue if they could deliver.

Along with a talented team that included Frank Sonzogni or Hershel “Junior” Conway, the brothers created a vehicle so exquisite, that it transformed custom car manufacturing into an art form and influenced generations of builders in the decades that followed.

It featured an intimidating number of intricate modifications, like a redesigned fender line that stretched from the headlights, all the way to the ’52 Lincoln-sourced taillights. Its rood was chopped, the whole body lowered through the grueling process of sectioning, and the revamped side window frames had a distinctive curvature that was just mind-blowingly beautiful The car’s clean look was augmented even further by several scoops, a custom grille, Cadillac hubcaps, or the removal of all stock emblems and door handles, the latter of which were replaced with electric solenoids actuated via chrome buttons discretely incorporated into the window frames.

Finished off with a custom interior and a unique two-tone green paint, there was simply nothing like it on the streets. Nicknamed Hirohata Merc, it toured virtually every car meet and auto show in the country, earning numerous awards in the process.

By 1955, the Merc’s standard Ford flathead V8 was replaced with a Cadillac motor, and its iconic pastel green paint was replaced by a shade of gold for its appearance in a film called Running Wild. Shortly after that, Hirohata decided to sell the iconic vehicle which would endure years of neglect in the hands of its new owners.

In 1959, a young enthusiast by the name of Jim McNiel spotted the car and convinced its owner to sell it for a mere $500. At the time, the era of classic customs had drawn to a close, and everyone seemed to have forgotten about the Hirohata Merc. Luckily, Jim knew what this vehicle meant and decided to restore it to its former glory. Initially, he only managed to fix some of its most nagging issues, making it drivable but, as time went by and his family grew, he had less and less time to work on the car which sat in his garage, patiently waiting to get back on the roads. Years later, with the help of historian Greg Sharp and Rod & Custom magazine editor Pat Ganahl, he was able to secure the funds to finally restore the Merc. Most of the work was done by Jim himself, in his garage, with welp from friends, but also members of the original Barris crew such as Junior Conway who repainted the body in its original colors.

In 2016, the Merc was back on the roads in mint condition with Jim and his wife taking it to auto shows all over the world.

Sadly, Jim McNiel passed away in 2018, and the car was sold by his family to a private collector. The new owner auctioned it off at a Mecum event last month (January 2022), fetching no less than $1.95 million for this incredible piece of automotive history.

Seven decades after it first arived at the Barris Kustoms garage, the Hirohata Merc remains as mind-blowingly beautiful as it was back in the 1950’s thanks to Jim and the people who helped him restore it. With a legacy like no other, it continues to be one of the most iconic, inspirational, and sophisticated custom cars ever built.

If you would like to learn more about it, we recommend watching the brilliant documentary below, which was originally posted on YouTube by Hagerty Drivers Foundation. 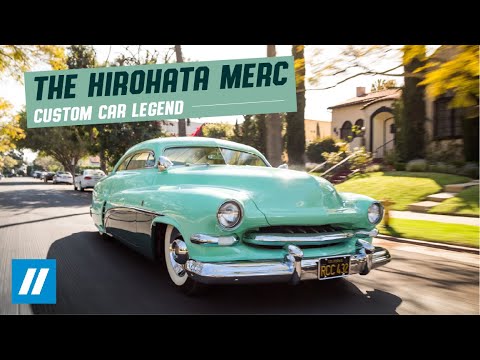