2 Light as a Feather and Solid as a Bull, This Claims to Be the Most Compact Bike Rack Ever

3 Juiced Bikes Gives Us a Closer Look at Its New Envy-Inducing E-Bike, a Must-Have in 2022

4 Tuck Bike Is the World’s First Bike With Folding Wheels, Compact as a Suitcase

Himiway's New e-Bikes Are Inspired by the Animal Kingdom, Offer Ranges of Up to 80 Miles

E-bike manufacturer Himiway recently dropped four new fat tire models and they are as cool as their names. Inspired from the animal kingdom, the wheelers boast a very attractive design and long ranges, to name just two of their top-selling features.
9 photos

Despite only having three models available until now, Himiway brags about having sold over 30,000 e-bikes in a year, with customers appreciating the bikes' impressive range, versatility, and solid, reliable construction. Now the manufacturer adds four more bikes to the lineup: Zebra, Big Dog, Cobra, and Cobra Pro.

All of them embody the animals after which they were named. All the e-bikes share the same basic features, except for the Cobra Pro, which is more powerful than the other three.

Designed as the company’s new premium, all-terrain, long-range bike, the Zebra shines through its incredible stamina, just like the animal it tries to honor. The bike is available in a 'step over' and a 'step thru' version. Both will set you back $2,000.

The Big Dog is designed as a cargo bike suitable for carrying equipment, making deliveries, and so on. It comes with some really useful rear racks and space to add bags, proving to be useful and reliable every time you need it. It is priced at $2,100.

Himiway’s Cobra and Cobra Pro are described as the most extreme e-bikes built by the manufacturer so far. They feature a softail design, mid-drive motor, improved suspension, and the widest tires. The Cobra is priced at $2,400, while the Cobra Pro will cost you $4,000.

You can check out all the models on the Himiway website. They are all available to pre-order, with shipping being scheduled to begin in February 2022.

There's also a thorough presentation of the bikes you can watch in the video below (skip to 1:04:08 to save time). 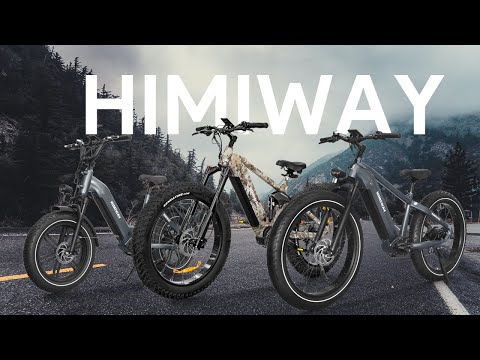