2 NASA Is Looking for the Next-Gen Lunar Vehicle, Won't Be Your Grandpa's Moon Buggy

3 Dust to Dust, and Moondust to Oxygen – We’re Going to Space to Be Miners

4 When the Lights Go Out, This Apollo 15 Watch Shows You Asteroid Impacts on the Moon

5 Ispace Shows Its New Tough Lunar Lander, Plans to Put It on the Moon in 2024
Car video reviews:
Coverstory

We’ve had our share of spectacular celestial events this year, from the “Ring of fire” solar eclipse and Strawberry Supermoon in June, to the Perseids meteor shower in August. But even though it seems less impressive by comparison, the full moon on September 20 is actually a unique event in its own right.
7 photos

The next full moon is set to appear on Monday evening, at 7:55 p.m. EDT. Those living anywhere in the U.S. will be able to see this full moon from Sunday evening until Wednesday morning. For those living in Europe, Asia, Australia, and most of Africa, the moon will become full on Tuesday, September 21.

But that’s not the trickiest thing about this particular moon. What makes it fascinating and different than any other full moon is that it rises at almost the same hour, close to sunset, for the following evenings. Normally, full moons rise 50 minutes later each night. But, according to the National Aeronautics and Space Administration (NASA), the Harvest moon rises only 25 minutes later across the U.S., and only 10 to 20 minutes later in Canada and Europe.

This was a very useful thing back in the day, when farmers could take advantage of the extra light offered by the early-rising Harvest moon, in order to finish harvesting the crops – hence the moon’s name. Today, we may not need the moon’s light, but we could all enjoy observing it for several evenings in a row, at almost the same time, something that will never occur again for the rest of the year.

The Harvest moon could also be seen as the happiest full moon of the year, if we consider the traditional names that were associated with it. Unlike some of the others, this full moon is a symbol of only beautiful, joyous things, from leaves changing their color (Yellow Leaf Moon), crops being ready to gather and fruit to be picked, to animals mating (Mating Moon) or weaning their cubs (Child Moon).

So, enjoy the light of the happy Harvest moon this coming Monday evening, when the sunset will be extra special. 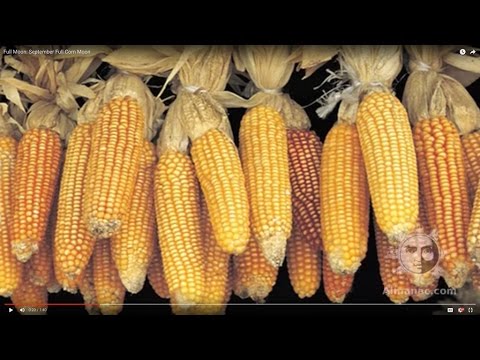