3 Enthusiast KTM Rider Falls Down A Mine Shaft

4 Douchebag Rider Slams Into Guardrail, Others Crash Into Him

Here’s Why Motocross Helmets Aren’t Good For the Highway

We turn to YouTube star RoyalJordanian once again as one of his newest videos show how dangerous a motocross helmet can get at high speeds if it still has the beak attached to it.
1 photo
Before diving into the action, you probably want to know why the hell does motocross helmets even come with that beak on top. Well, along with riding a dirt bike comes mud and dust that gets airborne from the motorcycle(s) upfront and usually ends up on you.

That beak acts almost like eaves on a house, preventing all the muck and grime landing directly on the helmet’s visor or goggles so the rider can still see upfront. It also provides shade in sunny weather and may be able to fling off some skinny branches when going through wooded areas.

Returning to our video, you’ll see RJ here rocking one of those motocross-inspired helmets which still has the beak attached to it despite the fact that he is hauling a*s at over 100 mph somewhere in the African desert.

He probably counted on the motorcycle’s big windshield to provide enough wind protection not to interfere with the not-so-aerodynamic shape of the helmet. But, unfortunately, a jet of air caught the helmet by the beak and violently threw it backward along with RJ’s head.

Although he managed to slow down and recover without injury, this sort of deal could easily cause some severe whiplash if it gets you with your guard down. Although these type of helmets can be used for city use or some light touring, wearing them at speeds over 90 mph can be both uncomfortable and dangerous.

If it’s your only helmet and plan using it both on and off-road you should consider unmounting and mounting that beak according to the situation. 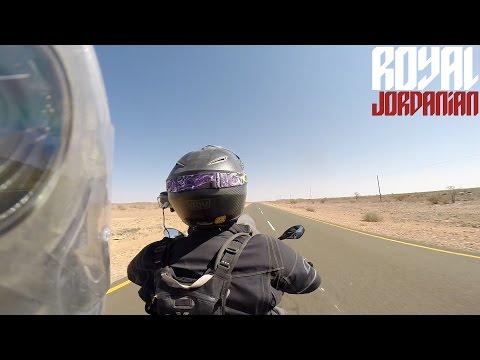