1 Packing a 2,500 HP HEMI, This 1970 Challenger Is Street-Legal Restomod Insanity

It’s surprisingly easy but, when I say “easy”, I mean you won’t have to spend half of the day disassembling body panels and dropping the engine. However, you’ll still need to put in 15 to 20 hours of work to install the awesome ProCharger blower kit on your mid-engine Stingray.
12 photos

If you’re a fan of high-performance customizations, the name ProCharger rings a very familiar bell. Headquartered in Lenexa, Kansas, the company founded by Dan and Ken Jones in 1993 has been manufacturing some of the world’s most outrageous centrifugal superchargers. Their products are tailored for a huge variety of vehicles, including the first seven generations of the Corvette.

For more than a year, the crew has worked their rear ends off to create a blower kit for the C8, a task that wasn’t as easy as one might expect, considering that Chevy’s latest sports car finally comes with a mid-mounted engine. This layout proved to be quite a challenge, because of the narrow space they had available for the blower and its auxiliary components. Thankfully, the forced induction wizards managed to work around the restrictions after months of trial and error, managing to not only squeeze in all the hardware, but also leave enough room for the removable roof and golf clubs in the ‘Vette’s narrow storage compartment, just like GM intended.

Now available from any authorized ProCharger dealer, the C8 supercharger kit was designed to boost the LT2’s output by up to 180 hp without compromising the engine’s reliability or the car’s day-to-day drivability. Even more exciting, the bolt-on package is easier to install than most would have expected – that is if you have the required tools, skill, and above all, patience.

But, before we get into that, let’s examine some of its most interesting contents. Apart from either the P-1X or P-1SC-1 head unit, the kit includes a stunning billet intake manifold with a built-in air-to-water intercooler, sturdy billet brackets, a stainless-steel drive shaft fitted with the necessary bearings and pulleys, a radiator and fan assembly for the blower, as well as the belts and tubing required.

Unlike previous Corvette generations, you don’t have to disassemble the bumper or lower the engine to mount everything in place. That being said, you do have to begin by pulling out the carpet from the rear trunk, then unscrew and remove the plastic lid to gain access to the mid-mounted V8.

The next step requires the removal of the factory airbox and intake manifold, after which you have to move under the car and take off the rear skid plate. You don’t necessarily need a lift to do this, but if you have access to one, it will make the job a whole lot easier. The auxiliary six-rib drive belt and tensioner also have to come off (this is where a lift truly helps) so you can have enough room to install the first billet pulley bracket. This part has an integrated bearing cap that houses the front bearing fitted to the stainless-steel drive shaft, so make sure to remove it after securing the bracket and reinstalling the tensioner.

Once the new component is mounted, you have to move to the rear side of the engine (the one closest to the rear trunk) and fit the main bracket assembly which bolts onto the passenger-side cylinder head. Like the pulley bracket, this component comes with two bearing caps that you have to remove to fit the driveshaft. With the shaft bearings properly aligned on the two brackets, the caps have to be bolted back on, then the new six-rib belt can be safely installed, followed by the beasty ProCharger intake.

Next up, the rear wheel and wheel liner on the passenger side has to be removed to make room for the blower’s radiator, fan, expansion tank, and auxiliary water pump, which fit in place of a smaller colling assembly that was initially used by the stock airbox. Of course, you’ll have to unscrew and get rid of it before installing the new hardware.

After filling the tank with the required amount of coolant, you’ll move back to the engine bay to mount the bracket assembly and ProCharger blower. Before bolting the unit to the shaft and bracket, make sure you don’t forget to install the included cog belt. With all this done, the tubing that connects the supercharger to the throttle body can be fitted.

One of the final steps requires the removal of the stock MAF sensor from the factory airbox and relocating it to the new air inlet tube before connecting it to the blower.

Now that everything is in place, the old engine cover won’t fit back in, but the guys at ProCharger have you covered with an optional carbon-fiber alternative. Although it features a big bulge to make room for the supercharger and inlet tube, it does not obscure the Targa top which fits snuggly inside the trunk.

With the P-1X unit, this kit will increase power to around 150 hp and 90 lb-ft (122 Nm) of torque. Choose the P-1SC-1, and you’ll be able to squeeze out more, but an optional HO Intercooled Tuner Kit Plus is be required. The price for all the hardware is only available on request and it varies depending on the head unit and optional accesories you choose.

The company promises that it will also release a Stage 2 kit in the near future and with it, the C8 Corvette will be able to spit out more than 1,000 hp.

Keep in mind that this is just an overview of the installation process. If you have the necessary tools and know-how to do it yourself, be sure to follow the nearly 300 steps detailed in the 76-page installation manual.

If you want to see the full presentation of the world’s first supercharger kit for the C8, check out the awesome video below posted on YouTube by the ProCharger team. 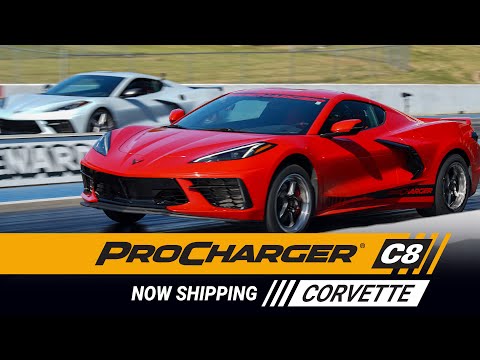