Home > News > Car Profile
Mircea Panait
One year and three months after it was unveiled in the flesh at the Frankfurt Motor Show, the Sian FKP 37 has finally touched down on U.S. soil. In addition to being the first hybrid Lambo entitled to wear a license plate, this model serves as a preview for the successor of the Aventador S.
52 photos

To be revealed in 2021, the twelve-cylinder bull will soldier on with natural aspiration. But in order to cut down on emissions, engineers in Sant’Agata Bolognese have confirmed that hybridization is inevitable. Also worthy of note, electric AWD promises neck-snapping performance off the line.

Prior to delivery, Lamborghini Newport Beach packed the Sian FKP 37 in a wooden crate. Hidden under wrapping paper and a red bow, the electrified bull in the following video is one of 63 units for the entire world. The fixed-head coupe will be joined by 19 roadsters, and every single car is sold out.

Estimated to start at $3.3 or $3.6 million depending on who you ask, the Sian FKP 37 is pretty darn expensive even by Bugatti standards. For reference, the Aventador S costs $417,830 while the Chiron kicks off at $2.9 million.

Rather than a lithium-ion battery, energy accumulation is the duty of a supercapacitor. Three times more powerful than a battery of the same weight and three times lighter than a battery producing the same power, this technological marvel juices up an e-motor that develops 34 horsepower.

Just like the Ford F-150 PowerBoost V6, the electric motor is integrated into the transmission. All told, the Sian FKP 37 belts out 819 PS (807 horsepower). The instant torque produced by the e-motor also helps this bull accelerate faster than any road-going Lamborghini. The Italian brand quotes less than 2.8 seconds to 100 kph (62 mph) and a top speed of 350 kph (217 mph).

"The Sian is a masterpiece in possibilities," said head honcho Stefano Domenicali, who announced his departure from Sant’Agata Bolognese three months ago. Why? Well, he couldn’t resist the opportunity to return to the world of motorized sports as the chief executive officer of Formula 1. 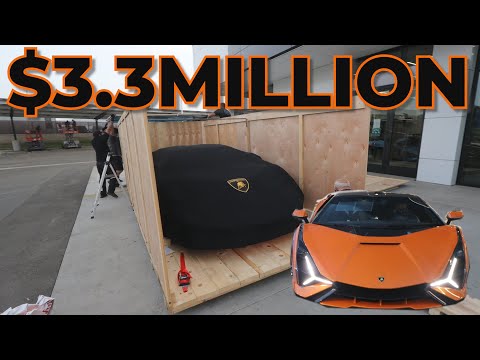