Here’s Tesla’s Model S Going Up Against the Rest of the World, Drag Racing – Video

By now you’re probably sick of videos of Tesla’s Model S P85D trampling all over cars that shouldn’t be trampled over in the first place. We’re talking about supercars here, and they do get their asses spanked most of the time when going up against the EV.
1 photo
The thing is, if you know anything about cars, internal combustion engines and electric motors, you’ll also soon realize that what’s happening is entirely normal.

The Tesla has 691 HP at its disposal, all-wheel drive and an insane mode button that allows it to launch without any wheelspin. So what, you may say, other cars have that too, and yet they can’t go as fast as this four-door, heavy sedan. You’d be right, but the trick is the Model S, be it P85D or the P85 or any other model you want, has all of that available from 1 RPM.

That amount of power, coupled with 931 Nm (687 lb-ft) of torque makes this 2.2-ton monster a worthy adversary on the drag strip. The thing is, once internal combustion engine cars reach higher speeds they can easily overtake or keep up with the Tesla.

The acceleration of the EV is brutal at first but it then evens out due to its powertrain, and that’s where supercars catch up. Depending on what it’s going up against, that can happen earlier or later during the race, but it will happen.

As you’re going to see in the video below, the Tesla does have the edge on anything from a standstill for a few of yards. Then things change, but the video is edited so that you see the EV only when it’s leading, being cut as soon as its rival starts catching up. We don’t mind though, it’s still an impressive compilation, watching cars like the Ferrari F12, Lamborghini SuperTrofeo, Audi R8, Corvettes and BMW’s i8 sweating in front of any model is an amusing occasion. 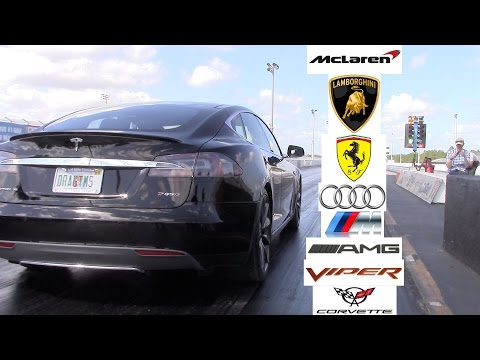