1 On Board Justin Bieber’s $2 Million Prevost Tour Bus, a Penthouse on Wheels

5 Justin Bieber and His Prevost RV Drop by State Prison to Spread the Gospel
Car video reviews:
Up Next

Justin Bieber had come a long way from his baby-faced, “Baby”-singing days, when his appeal was strictly limited to the younger and widely impressionable audience. These days, he’s a respectable and respected artist, one who is not afraid to occasionally wander outside of his comfort zone.
8 photos

Every once in a while, the Biebs signs his name to something that is not music, and invariably, each collaboration tends to sell out. He has his own apparel and accessories line, and he’s also done a limited-edition Rad Power Bikes RadMini e-bike, and these are just two of the most recent examples. In December last year, Vespa maker Piaggio announced that they had partnered with the pop star for a unique, limited-edition scooter that would be all about creative freedom, style, and love of design.

The Justin Bieber x Vespa scooter should have been revealed in February this year, but as the saying goes, it’s better late than never: it’s here now, with the pre-order books officially opening on April 18, and deliveries scheduled to kick off right away. It’s a limited-edition Sprint model offered in three engine configurations, with an all-white finish with flames and Justin Bieber decals and plenty of other custom touches throughout.

The official ad, which you can see in full below, places a lot of emphasis on how Bieber is not some sort of sell-out for putting his name on a scooter but rather a creative itching to be edgy and push things forward. “The ability to create something that you know is going to inspire somebody else is so important to me. Creating things, it's a part of me,” Bieber says. “When I'm designing, I'm always thinking about: is this pushing things forward? Is this unique?”

He hopes the Bieber x Vespa scooter is all these things. The crew on the set of the ad branded it “white lighting” because of the all-white paintjob, and the pop star says that the stylized flames on the front and rear add that extra edge to keep it from being too bland.

Riding on custom, matching 12-inch alloy 7-spoke sport wheels, the scooter comes in 50, 125, and 150cc variations for the i-get (Italian Green Experience Technology) 4-stroke air-cooled engine with electronic injection. The angled mirrors and the square headlight are instantly recognizable for a Vespa but have been modernized. Features also include a multi-function full-color 4.3” TFT display for vital stats, a remote seat opener, and Bike Finder.

For the full package, the collaboration will include a capsule collection of limited-edition accessories, including gloves, an all-white helmet with a matching design, and a travel bag. If you’re a Belieber, you might as well go all the way. Pricing for the Justin Bieber x Vespa Sprint collection starts at $4,999. 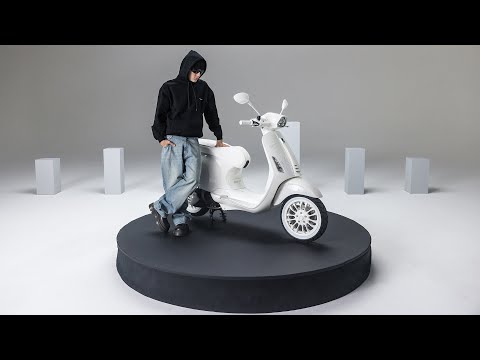