2 Replacing Spark Plug Wires Is As Easy As Pie

3 This Nissan 240SX Is Powered by a Cummins Diesel

Here’s How You Quickly Stop a Runaway Diesel

Home > News > Auto Guide
3 Oct 2014, 12:27 UTC ·
by
Do you know why some people like to call diesels Satan’s engines? Yeah, rattling and soot were the most common reasons, despite not necessarily applying to modern engines, but another reason for that is the fact that they can betray you and cause what's called a runaway, putting life and limb at risk.
1 photo
You’ve probably heard about a runaway diesel at some point or may have even experienced the ordeal back in the day when these engines were not that electronically controlled.

Whatever the case, we’re here to tell you what can cause this problem, the risks and how to quickly put an end to such a situation.What is a diesel runaway?
In short terms, when a diesel develops a runaway it means the damn thing will rev uncontrollably towards the red-zone on the rev-counter. Noise and black smoke/soot at the back are coming as a bonus. What are the risks if a runaway happens?
If you encounter a runaway while driving, the car will start accelerate uncontrollably which may cause you to crash, depending on your driving skill and the ability to keep your calm or not.

A stationary runaway will basically destroy the engine if not stopped in time. Depending on conditions, the engine might even rip itself open, spraying shreds and pieces all around the place.What causes a diesel runaway?
A gasoline engine’s speed is controlled by the throttle body, which lets more or less air to enter the cylinders and burn more or less fuel to create a bigger or smaller bang. In a diesel engine, airflow has no restrictions and it’s kept under control just by the amount of fuel injected into the cylinders.

So basically, as long as there’s air and something to be ignited inside the cylinders, the diesel engine will keep working forever as it relays on compression to burn the fuel than on a spark like gasoline engines.

Modern day diesel engines are less likely to runaway since fuel is calculated and supplied by a computer depending on multiple factors. Even if something happens to the acceleration pedal (which uses a drive by wire system) the computer will cut the fuel to idling conditions when you apply the brake for at least half a second even if you put the pedal to the metal.

However, a bad accelerator pedal is the least common cause for a diesel runaway. You should be more concerned about other fuels than diesel that can be ingested by the engine and cannot be controlled.

For example, if the car is surrounded by air contaminated with natural gas or propane, this may cause a runaway and will stop only when the gases are no longer present or the air supply is cut off. Some engines can run on charcoal dust and even oils. As a reminder, you should know that when the diesel engine was invented, diesel fuel didn't exist and it was working on vegetable oil.

Speaking of oils, this is the most common cause of a diesel engine going amok. You’re probably asking who in his right mind will pour oil in an engine intake, but don’t forget the engine itself uses quite a lot of lubricating oil to work smoothly.

Yep, the lubricating oil is the biggest enemy and it can be consumed in two ways - via the turbocharger or a crankcase breather pipe.

As you may know, the turbocharger spins at thousands of rotations per minute to pump more air for the engine. To do so for long periods of time, oil is used to lubricate its rotating group and keep its temperature normal.

“Old and busted” works for oil sent into the engine via the crankcase ventilation as well. The crankcase is connected via hoses to the intake to ventilate the oil mist created when the engine works. If the piston rings are old they won’t properly seal the combustion chamber during the explosion, letting pressurized gas enter the crankcase bellow and push more mist into the intake and so on.

Putting too much oil in your engine will help cause the aforementioned situation.How to stop a runaway diesel, then?
To stop a diesel working you have to either cut its fuel or air supply. However, if you encounter this while driving, mechanical force will come at hand first. Whichever is the case, make sure any following actions are safe to perform. This is a general guide and may not be able to work with different real life circumstances.

If your diesel runaways while you’re driving, you will certainly feel the unintended acceleration. Lift off of the accelerator pedal and apply the brakes - watch out how close another vehicle is following you so it will notice and avoid a rear end collision. Under no circumstance should you put the engine higher than your own life (or others). Let the engine scream like hell, put the transmission into neutral so it won’t accelerate anymore and pull over.

Don’t panic if you drive an automatic because most of them will allow you to select neutral and stop while on the go.

Scared to do anything else after you stopped? Just let the damn thing consume itself and call the authorities. Don’t forget to back off and warn people nearby what’s going on.

Not scared after pulling over? Then the quickest method to shut the engine off is to use the CO2 fire extinguisher you normally carry in your car. Grab it, pop the hood and spray right near the intake. It helps if you know which one that is before. If not, spray everywhere. The CO2 will replace the air needed to burn the fuel which should stop the engine.

This method also works if flammable gasses surrounding the car have started the runaway. However, if oil in the intake is causing the runaway, there’s going to be a lot of smoke coming out from the exhaust. If wind blows from behind and covers the whole car, you should better stay away and call the authorities.

Don’t have a CO2 extinguisher? Another way to cut the engine’s air supply is by manually blocking the intake with something - a rag or a piece of plywood. If you covered the intake snuggly but the engine still runs, it means there are leaks along the rest of the intake piping and the engine is able to suck from there.

If you tried the first method, by putting it in neutral and pulling over, the maneuver can still be performed in the same way - after safely coming to a stop, hold the brakes firmly, engage the highest gear and dump the clutch. The car might jerk forward so watch out.What to do after you stopped a runaway diesel?
Even if you went through a mild runaway, under no circumstances should you start the engine again. If the car is stopped in a safe position, not interfering with the traffic, just leave it there with the hazard lights on and call road assistance to give it a tow to the nearest service shop.

If your car is bothering the traffic, put on the hazard lights and push it off the road if you can.

The videos bellow show a runaway compilation and how easy it is to stop a runaway diesel engine by covering its intake. If you’re trying to choke an engine right from the turbocharger, you should definitely watch out not to stick a finger into its rotors. 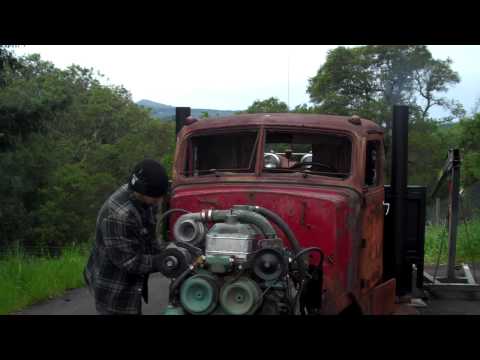