4 Mercedes-Benz G63 AMG Gets 2JZ Engine Swap in Dubai, Sounds Like an AK-47

Building a sport utility vehicle doesn’t come cheap, especially a body-on-frame legend in the off-road such as the Geländewagen. The high-quality parts, bundles of technological wizardry, and labor costs in Austria are a few of the culprits, but nevertheless, the G-Class is worth your hard-earned cash.
54 photos

The cheapest specification starts at $124,500 in the United States, but Europeans are treated to the more affordable G 350 d at €95,021.50 in Germany. At the opposite end of the spectrum, the G 63 takes the crown in every single aspect. But have you ever wondered how the G-Class is manufactured?

Since the beginning, the Geländewagen was manufactured in Graz by Magna Steyr with close attention to detail. In other words, the production output doesn’t match that of regular SUVs. In July 2017, the 300,000th example of the breed rolled off the assembly line, and the numbers keep increasing since the arrival of the new G.

Shmee150 (a.k.a. Tim Burton) bought one of these gentle giants, and thanks to his status in the automotive world and YouTube creators community, the three-pointed star invited him to check out how the W463 is manufactured. “Wait, wasn’t W463 used for the previous generation?” You’re right, dearest reader, but the higher-ups decided to keep the codename instead of switching to W464.

The production process starts with the bodies of the G-Class arriving at Magna Steyr, then the specialized personnel builds the vehicle, one part and subassembly at time. Among others, Shmee150 was allowed to fit the steering wheel and airbag to the G 63 of his dreams.

In regard to suck-squeeze-bang-blow, the metallic black SUV features a 4.0-liter V8 with twin turbocharging that originates from Affalterbach. Codenamed M177, this engine differs from the Mercedes-AMG GT series through the wet-sump lubrication system and AMG Speedshift TCT 9G automatic transmission. 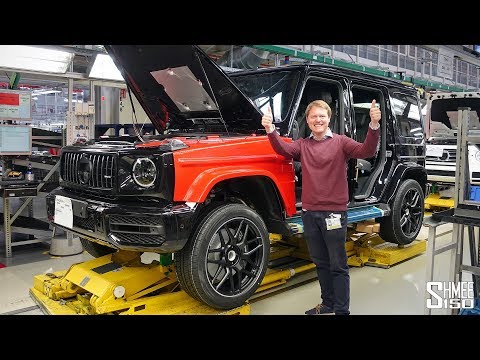