Here’s How Floyd Mayweather's Ferrari Enzo Drives on the Road

Home > News > Athletes
Ionut Ungureanu
After a downforce of 1,700 lb-ft (7,600 Nm) is reached at 186 mph (300 km/h) the rear wing is actuated by computer to maintain that value. There’s no sound system inside, the only blessing melody you hear is created by that gorgeous 12 cylinder F140 B V12 engine. We’re talking about Formula One technology all the way, a true car toy few people have the chance to play with, and Floyd Mayweather is one of them.
1 photo
Remember when we were telling you people how the five-division champ is using his assets to promote the merchandise sold by his The Money Team company? Well, it’s true. Take this video we just stumbled upon that has Floyd Mayweather's personal driver showcase the fighter’s most esteemed Ferrari, the Enzo.

Bruce-the-driver is most likely one of the happiest car people out there since he gets to play with such rare breeds. But the video downstairs is not about what a great life being a Mayweather employee must be. No, it’s about clever marketing. Watching it will tickle your petrolhead senses eager for speed and proper engine sound. It will get your full attention, at first. Then, if you still have a little bit of focus left, you’ll find that the TMT mark is everywhere.

Floyd Mayweather’s trademark is present on Bruce’s hat (which they film in an excellent angle), on the other employees’ T-shirts, on the boxer’s gloves, shirts, socks and so on. The video is also promoting the Manny Pacquiao bout since it’s dated before the fight, but the way it was staged is quite smart.

Marketing or no marketing, the sound of a Ferrari Enzo is unmistakeable, and we’re going to have to be honest with you guys, we’ve watched it three times in a row. Or should we say listened? 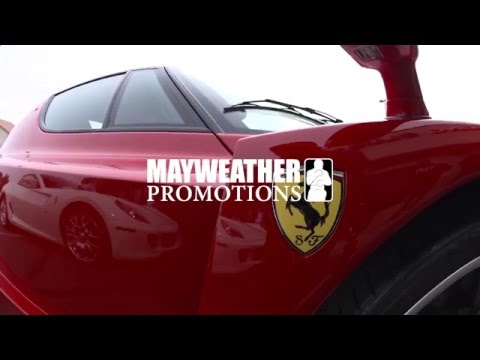