3 Why Wait, You Can Build Your Own Cybertruck Now – Using a 1988 Chevy Dually

5 Full-Size Tesla Cybertruck Replica Looks like a Chinese Copy, Is Not Electric
Car video reviews:
Up Next

It might be another while until all those 650,000+ people who reserved a Cybertruck might actually get to drive one, but one man from Bosnia and Herzegovina has the closest thing to it. Almost, sort of.
10 photos

There’s a Cybertruck replica roaming on private roads in the Balkans, still pending full registration and road-legal status. Unlike the Tesla pickup truck, this is not an electric vehicle, but it is one that comes closest to the Cybertruck in terms of exterior and interior design.

This replica, sometimes referred to as the Bosnian Cybertruck is, as far as we know, the only one of this kind in Europe. For this reason, it’s gotten plenty of coverage already, even making international headlines on a couple of occasions. That said, until now, the owner has refused to talk to the media about how the project came to be or how it was made possible.

That man is Igor Krezic (aka "Jim" for YouTuber Kim Java, who got to interview him - video below) and he runs a company called Stark Solutions. He owns the replica that his team built (under director Mario Coric’s supervision) but he wasn’t actively involved in the process.

Igor tells Kim that the cost of the entire build was incredibly low, since they used one of the company’s old cars, a Ford F-150 Raptor, and worked on their own time, dedicating the budget to the materials needed to build the body. They strove to use similar materials to what is found on the Cybertruck and to recreate its dimensions and features based on extensive studies of all Cybertruck-related materials available online.

Other than that, the vehicle is still a Ford truck. Put it simply, they made no other modifications aside from the aesthetic ones on the outside and inside.

The central touchscreen inside has about 10 percent functionality. Igor says you can use it to open the doors, for climate control and to check on the camera mirrors. They’re working on adding more functionality to it, but he doesn’t elaborate on that.

Igor owns a Model 3 and a Model X, and has made reservations for a Roadster and a Cybertruck. He’s not holding out hope of actually getting the Cybertruck, since it’s not legal in Europe with its current dimensions and it might be another while until a smaller European version comes out. This replica, which he estimates cost €10,000 ($11,670), is the closest thing he’ll get for a while. The bad news is that it’s not road-legal yet, as Igor is still trying to have it registered, which means he can only drive it on private roads for the time being.

The project took eight months in total, due to delays caused by the lockdown of earlier this year. In total, Igor’s team worked three to four months on the replica. Igor is adamant that they won’t be building another one: “if you like Cybertruck, buy Cybertruck and wait for Cybertruck,” he says. 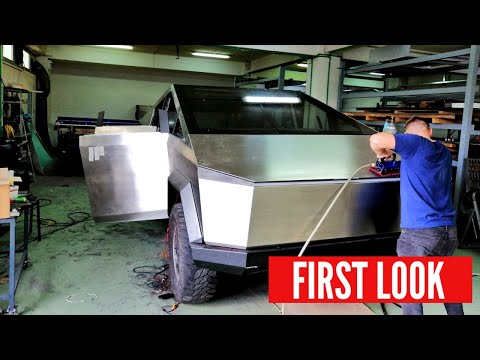