2 Google Maps 5.55 for iPhone and CarPlay Is Now Available for Download

Huawei is one of the companies that are pushing for a world without Google, pretty much because it has no other option.
6 photos

Due to the sanctions in the United States, Huawei is no longer allowed to use Google services, so its phones can’t run the licensed version of Android or come bundled with applications developed by the search giant. These include Gmail, Google Maps, and others.

Earlier this month, Huawei officially announced a new app suite that’s supposed not only to serve as an alternative to Google services but to actually compete against them.

And as far as Google Maps is concerned, Huawei’s big bet is Petal Maps, a new app whose purpose is to offer pretty much the same capabilities as its more popular rival.

Petal Maps comes with everything you’d expect to find in a map app, including navigation that’s supposed to make it easier for drivers to find a specific destination faster when a Huawei device is being used. But is Petal Maps really worth giving up on Google Maps?

The video that you see below and which was published by YouTuber Leszek Lesner compares Google Maps with Petal Maps (and a few others) side by side, showing just how far Huawei has managed to go in terms of building a worthy product.

While we’re not trying to provide any spoilers, it’s pretty clear that Google Maps is still the more polished app, and unsurprisingly, Petal Maps still needs a bunch of improvements, especially as far as the searching experience is concerned.

One of the features that set Petal Maps apart from Google Maps and the rest of the alternatives out there is gesture support, which allows users to jump from one mode to another by simply waving their hand in front of the screen.

“Thanks to HUAWEI Mate 40 Series devices' Gesture Control, drivers are able to switch between the navigation view and map overview by simply using ‘air press’ towards the screen with their palms. These smart interactions significantly enhance the ease of travel, as well as facilitate a safe driving experience,” Huawei explained.

The beta version of Petal Maps is available in the Huawei AppGallery. 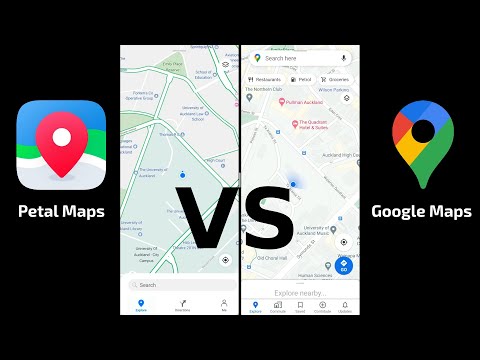