1 Fast 9 Is Being Boycotted for the Strangest Reason, and John Cena Is Sorry

5 Most Reliable Parking Sensor Is Also the Cutest, Not What You Expect
Coverstory

Here’s a Jaguar I-Pace Slamming Into a Poor Toyota Aygo, Because Parking Is Hard

Elena Gorgan
As a newbie driver, parking can be hard – perhaps one of the most challenging parts of driving. In addition to your own car getting damaged, you also have to consider the damage you could cause to other cars.
1 photo
As it turns out, parking is just as difficult when you have no consideration toward your own or other people’s vehicles. Or when you’re not even a newbie.

A video shot on the morning of May 20, 2021, in the parking lot of a hospital in the UK, has attained near viral status for the moral of the story it tells: “never drive a car that is too big to park.” The car in question is a seemingly brand new Jaguar I-Pace, slamming into a poor Toyota Aygo parked next to it, as the Jag driver desperately tries to fit within the parking bays.

Not that this couldn’t have been accomplished without slamming into the Aygo, but whoever is at the wheel clearly didn’t even stop to think about what they were doing for a second. And, before you assume that this is a woman driver, don’t. Darren Pittman, the person who recorded this hilarious moment, tells SWD Media that the driver was neither female nor in any way incapacitated.

He was a man in his 40s, looking sober “as a judge” and not having any medical emergency, which would have easily explained his erratic and ultimately pointless back and forth maneuvers. After no less than four such moves, he eventually admitted defeat and backed out of the spot, going on his merry way. Hopefully, it was an empty parking lot where he could no longer cause any damage.

Speaking of which, the report doesn’t mention the kind of damage done to either vehicle, but Pittman says that, before he started filming, the Jaguar also hit a Ford Fiesta. Parking is hard, dammit! 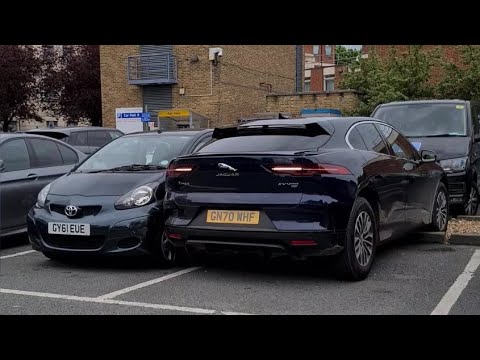