Warped Perception followers may be familiar with the MKIV Toyota Supra that’s often featured in the background. On this occasion, we’re treated to the internals of the 1,000-horsepower coupe like you’ve never seen them before.
49 photos

But first, let’s talk about that straight-six engine. In addition to a triple-disc carbon clutch assembly, a ginormous turbocharger, and a 75-millimeter throttle body, the 2JZ-GTE with 3.0 liters of displacement also features a GoPro inside the intake manifold. Considering how tough the action camera is, Warped Perception believes that it can hold its own against wide-open throttle runs under boost.

“With all the air pressure differences, turbulence, and flow, I have always wondered what was going on inside the intake manifold when I was driving around.” Oh, and by the way, “the sound of the engine from inside the manifold was surreal.”

You can also see the throttle body working and hear the turbo through all of the intercooler piping, but most importantly, take a look at how the air behaves inside the intake. On this run, the owner ran 14 to 16 pounds of boost because the GoPro restricts the air that should be going to the rearmost two cylinders.

Similarly interesting, the GoPro captures what happens inside the manifold when the boost drops to a vacuum as the driver gets off the gas pedal. You can fast-forward to the 2:36 mark of the following video because that is where the fun begins.

If you’re wondering what’s the red residue on the velocity stack of cylinder number four on start up, that would be power steering fluid from a low-pressure vacuum switch which bypasses fluid from the pump into the tube that connects to the intake manifold. It’s also worth highlighting that the camera captures a similarly red residue which is water vapor mixed with soot from the combustion.

Warped Perception doesn’t plan to stop here, though. In the coming weeks and months, action cameras will be rigged and mounted in “all sorts of unusual places to give us a unique perspective and understanding of how things work.” 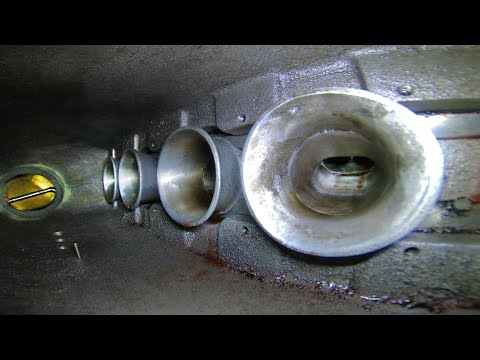