3 Supercar Blondie Gets to Drive the $4.5M Bugatti Chiron Hermes, Almost Wrecks It

4 A Look Inside Jeffree Star’s Garage, Packed With Custom and Insane Rides

Elena Gorgan
Whatever you think of Supercar Blondie’s credentials in the automotive field, or what you make of her as a person, she’s been on a roll ever since she got started as an auto vlogger. Now the world’s most famous and successful carfluencer, she’s able to generate headlines on her own.
11 photos

With good reason, too. In April this year, Supercar Blondie announced that she would be getting her very first “hypercar” and the first one in the world produced by Ares Design, an Italian coachbuilder. Ares Design is planning a 24-limited series of the Ares S1, and she is getting number one in a few months’ time.

When she made the announcement, Supercar Blondie kept calling the S1 a hypercar. Based on the C8 Corvette chassis, the S1 has a new body with elements inspired by or directly borrowed from other hypercar marques. The naturally-aspirated V8 delivers 705 hp and a 2.7-second time for 0 to 100 kph (62 mph), and Supercar Blondie said this was a proper hypercar made for a price of a supercar. Speaking strictly numbers, $650,000 instead of $2 million.

In a new video posted to her channel, she gives a new update on progress on her very special S1 and, at the same time, is a bit more clear on the “hypercar” claim. Maybe she read your comments because she now agrees: indeed, the S1 delivers supercar-comparable performance, but it definitely looks like a hypercar. So she’ll just keep calling it that.

Delivery is scheduled in a few months’ time, she says, and the car is already being assembled in Italy. The interior, which she says is like that of a spaceship, comes in black and brown, and she’ll be getting her famous logo stitched in the headrests. This is in keeping with what Ares has been saying all along: not only will the S1 be a limited edition, but each unit will be customized according to the owner’s specific requests.

Speaking of specific requests, Supercar Blondie had one she would not budge on. Instead of the scissor doors, she wanted gullwing. So, her Ares one-off will be the only one in the world with gullwing doors.

Here’s the first look at the first Ares S1. It’s not much, but it’s probably enough to shut down rumors about how it’s nothing but vaporware. 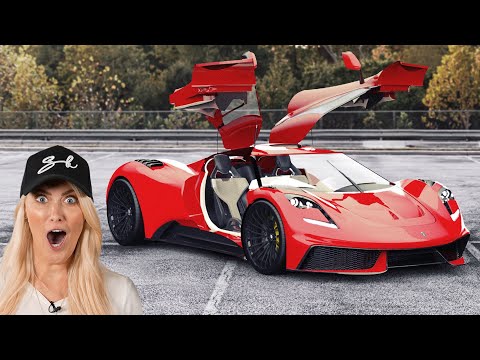