1 1943 Boeing Stearman 75 Biplane Is Cheaper Than a Corvette, More Thrilling

It’s not often that you see an actual plane used as an office building. The odds of that must be on par with seeing one slowly crawling down the motorway.
8 photos

Both these things happened in the UK the other day, when a decommissioned, cut-up Boeing 727 slowly made its way to its new home at a speed of about 20 mph (32 kph), causing traffic delays on the M5 and getting curious motorists to whip out their cellphones. It also got its own police escort because its size meant it took up two lanes of traffic.

The story of this plane, dubbed Pytch Air, is just as fascinating as the sight of it. You can see a video of how it was moved from Cotswold Airport in Glouchestershire to Bristol, where it will be turned into an office building. The aircraft belongs to businessman Johnny Palmer, who bought the decommissioned plane in 2018 but just recently came up with the idea for repurposing it, according to the Express.

Still, it will live on to serve. Palmer says that an expansion is in order for his media company's offices, but he didn’t want to resort to “carbon-intensive construction.” He came up with the idea of repurposing an “icon” and had the plane ferried to his company’s headquarters. Recycling at its best. Now that it’s here, he will lift it by crane on top of containers, and paint the containers with clouds, so that it looks as if it’s still flying.

“We decided to repurpose the icon of unsustainable hyper-consumption and have fun along the way,” Palmer says. And it seems the fun will continue to be had with this former jet. 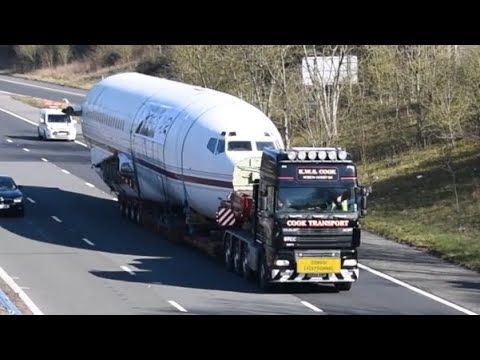