3 Toyota Thinks Its Car Is the Chocobo from Final Fantasy, Borrows Theme Song

Here's How the Renault Sandero R.S. Behaves on the Track

The upcoming Sandero R.S. might be Renault's newest model lucky enough to receive personalized treatment from Renaultsport division, but it also managed to cause a lot of stir among petrolheads.
1 photo
As you know, the Renault Sandero is also sold as the Dacia Sandero but when the news about a Sandero R.S. emerged, everybody was wondering about one thing: what engine will the next-to-be hot hatch hide under the hood?

The debate went on for a long time, but an insider from Dacia confirmed to autoevolution that the Sandero R.S. will pack a 2.0-liter naturally aspirated mill, managed via a six-speed manual. No word on performances, but Renault just released a video showing the new Sandero R.S. lapping the circuit while passengers are tracking their heart rate using the new R.S. monitor.

Judging by the beats-per-minutes recorded by the Renaultsport gizmo, we think the Sandero R.S. will have a cheeky way of drawing smiles on the faces of those behind the wheel. But as it happens with all good things, not everybody will get to enjoy the Sandero R.S.

That's mainly because Renault will avoid some markets once the Sandero R.S. is ready for launch. As a result, Brazil and Russia will get the warm hatch, but Europeans will have limited if zero access to it.

Design-wise, the Sandero R.S. will be upgraded to fall in line with the available performance figures and 17-inch wheels will spread the engine's resources on the asphalt. We'll see the car's final shape later this year, most likely at the Frankfurt Motor Show. 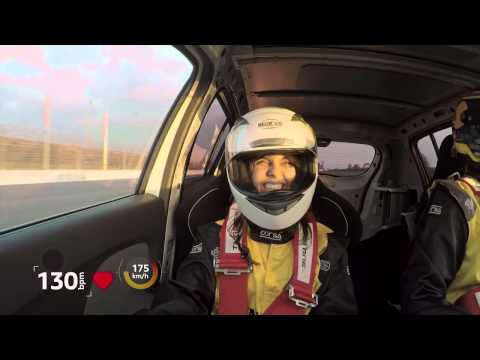