3 Rich Rebuilds Will Make a Diesel Tesla With a Cummins 4BT Engine: the Model D

Home > News > Car Profile
28 Dec 2021, 20:23 UTC ·
by Stephen Rivers
The Tesla Model S and the Model X share the same platform. It makes sense then that both would end up getting premium-level Plaid tri-motor speedy goodness. Still, we've seen lots of reviews and public footage of the sedan with little to no evidence that the SUV even exists. Now, that's changing as the first Model X Plaid SUVs have made their way into the hands of the public.
7 photos

To answer what might be many people's first question, yes, the yoke is fitted to this particular Model X Plaid. It's owned and shown to us by the guy behind RPM Tesla Aftermarket Accessories, so he knows his stuff. That's one reason we love the detailed breakdown of the interior in the video below.

It's interesting to note that while the Model X Plaid is by far the fastest and newest Model X on the market, there's quite a bit from the old car that looks nicer. The door panel is especially cheap looking on the new car compared to the old one. Small touches like the ambient lighting also seem like Tesla has done some cost-cutting for the new car.

Of course, the new car has a landscape infotainment system which is a big upgrade over the old portrait-style version. It's also got the rear-seat screen that controls media and climate controls. At the end of the day, the new Model X Plaid looks like it's got some upgrades and some downgrades.

It's important to note that while not discussed in the video, there are clearly some hilariously mismatched panels. Most notably, the Falcon-wing doors look like they settle too low on each side. This causes them to not line up with the front doors or the rear quarter panels.

Now the only question is how will it drive? We know that the Model S Plaid has had some major braking problems. It seems to go without saying that the much heavier Model X is likely to have similar if not worse issues reigning in its 1,020-horsepower. 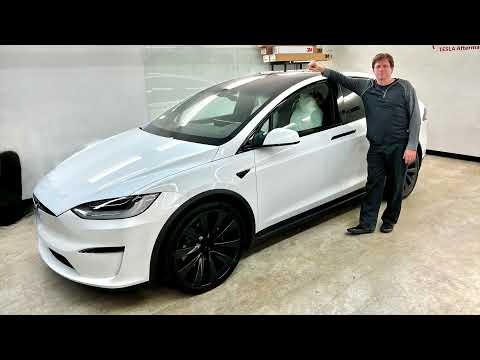