5 Hummer H1 vs Suzuki Jimny Drag Race Is No Contest, But the H1 Gets Revenge
Car video reviews:
Space Junk

A Camaro and a Hummer had a baby. This one of a kind build took only thirty days and 10,000 US dollars. The mud is just there to prove that it does what it is rumored to do.

Have you ever imagined what sort of offspring would result from a Chevy Camaro and a Hummer? Well, now you do. I can't really find any words to describe this, this machine. I've tried using beast. After some time, I realized that title doesn’t do it justice. I've tried using war-machine. Nope. I’ve tried using leviathan. Yeah, getting closer now. How about god? Sounds about right. But don’t imagine a well-shaved, clean-cut god. No, this god isn't afraid to get dirty. This god isn't afraid of pain. This god also has a thing for speed.

If you’ve ever been to an off-road car show you know there’s two types of rides you’ll see. The first one are the sponsored, fully decked out and clean machines. These are the rides people use to show off the newest gear and what it can do. The second type of ride you’ll see, are extremely beat-up, patchwork jobs or “never look at twice” kinda rides.

Sure, the clean-cut rides are indisputably well built and even offer amazing capabilities, but I've noticed that all these sponsors end up limiting a ride. You must use this and that, and that only works with this, and then there’s this other that, that does this. But all of this leads to rides looking and behaving the same, albeit with small differences.

So personally, I love the guys who break away from the pack and let their own imagination and dreams come to life. Chris Highman built this freaking thing in only 30 days. What you are looking at truly is a Camaro body, but all this body, engine, wheels, suspension, and steering components all sit upon a Hummer H1 chassis. Yeah, the same one still used by the U.S. Army.

But why use an H1 chassis? The reason being it was just cheaper. How cheap? A whole ten grand is the cost of the entire build. And I must say I believe him. It looks like my wife after a three-month lockdown, desperately in need of a salon visit.

Doesn’t matter though. It's capable. It's got 650 friggin horsepower! The engine is a GM LS1 V8 that makes this thing fly like it’s straight out of a video game. The steering is even done by a joystick in the cockpit. Just to make things a bit more fun, it also runs on E85 fuel to really through some fumes into the air. Oh, and I nearly forgot, it even has NOS on it...yeah. Like 650 hp wasn't enough.

There is a video at the end of this article that will offer you a look into exactly what it is I'm talking about. If you’ve had a chance to see someone taming a wild horse, be it live or on TV, that’s what you’ll see. A tamed animal.

If you check out the gallery, you’ll also see lots of mud. That’s because Highman uses this Camaro in mud drag racing. So, the mud is basically just there for proof. However, just watch it go on solid ground. 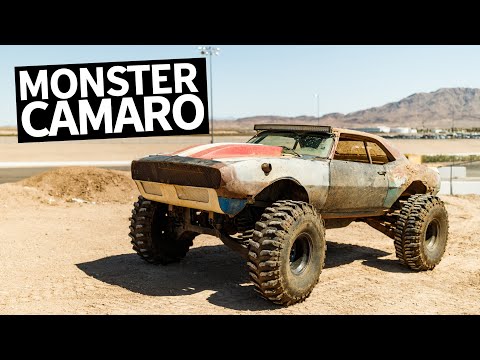