Over the past few years, we’ve seen it dance in the rain, line up in formation to pull along a truck, and even pull a rickshaw holding none other than Adam Savage behind it. And now, here it is tending to a flock of sheep.
10 photos

This is of course Boston Dynamic’s Spot, a four-legged metal creature first unveiled in 2016. In the time that has passed since, it has grown increasingly nimble, and it is now capable of performing tasks few could have imagined possible for a robot.

The video of Spot herding sheep is available below this text. It has been uploaded by a brand new Youtube channel belonging to a New Zealand software company called Robot Operations Platform (Rocos). The goal is to demonstrate machines like Spot can easily be used in farm work for a variety of operations.

“The use of autonomous robots in agriculture is increasing the efficiency of food production. Robots, like Spot from Boston Dynamics, increase accuracy in yield estimates, relieve the strain of worker shortages, and create precision in farming,” the group says in a text accompanying the video.

We don’t know anything about all that, but we do know this can be, again, one of the spookiest things to some people. That’s not only because the video shows Spot chasing sheep down a meadow, but we also get to see it enter cropped fields for patrol duties, climbing small hills or getting back down as if stalking its prey, or walk on bridges and then doing some weird stretching exercises.

As Boston Dynamics’ first commercial robot, expect to see it go to even more places soon. The company said from day one the robot can be used for a variety of tasks: working on construction sites, inspection of gas, oil and power installations, and even to ensure public safety. 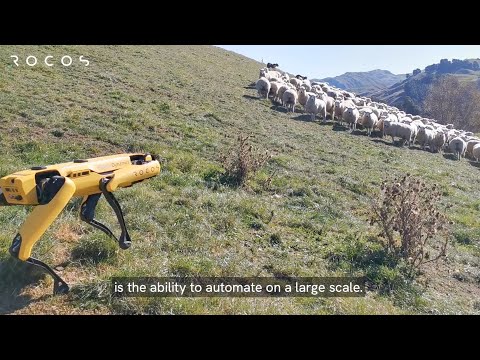