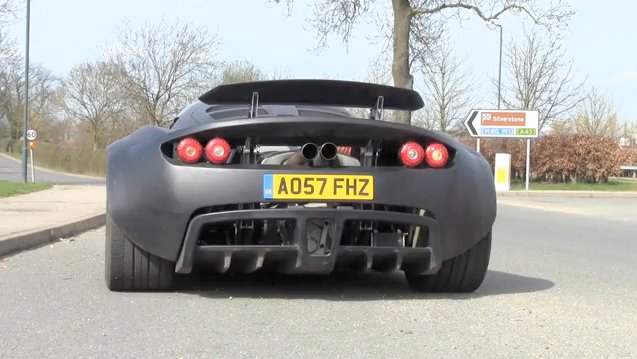 Hennessey Performance Engineering finally treats us with some real action that involves the Venom GT supercar, first unveiled some two weeks ago. The video posted on YouTube, shows the Lotus Elise-based car in road testing in Britain near Silverstone. You might also want to turn on your speakers, to hear how the super modified engine sounds like.

All this amount of power will be transmitted to the rear tires via a Ricardo 6-speed gearbox. The car is fitted with Michelin PS2 rubbers, while stopping power is delivered via Brembo brakes.

Hennessey’s Venom GT engines will be built at its Texas facility and further freighted to its assembly plant in Silverstone, UK. The manufacturer also plans to market the supercar in Europe, Russia and Australia.

Recently, the company also announced it has signed a partnership with DiMora Motorcar to market the Venom GT in the Middle East and India.

Buyers being offered a 1-day driver orientation and instruction program by a Hennessey factory test driver, at a track in the UK or USA prior to delivery.