3 Stock 2021 Ram TRX Does the Quarter-Mile in 12s With Four Inside, Can Do Better

The Hennessey VelociRaptor used to be associated with the Ford F-150 program, but customers wanted more than just a sports truck. Enter the VelociRaptor 700, based on the F-250, the heavy-duty truck which doesn't come in Raptor flavors from the factory.
6 photos

The EcoBoost engine in the second-gen Raptor seemed like a novelty at first, but people are beginning to realize that Ford targets efficiency over attitude and appeal. And so, custom sports rigs based on V8s are blooming, even though the Raptor should be the king in this segment.

This VelociRaptor seems like it's right in the path of the $125,000 Shelby F-250 Super Baja, though we don't actually have all the necessary details to support this. What we do have is a very entertaining dyno test video.

First the numbers: 527 rear-wheel horsepower and 560 rear-wheel lb-ft (758 Nm) of torque. The engine isn't mentioned in the video and the "700" isn't on Hennessey's website right now. But if we presume it's supposed to make 700 hp at the crank and extrapolate the 330 horsepower "baseline" shown in the dyno results, it suggests they started with about 440 Ford ponies, and that means they used a 7.3-liter, since the normal 6.2-liter found in the F-250 makes 385 hp. There's also the diesel choice, but the extra torque would give it away.

Obviously, we could be wrong in both cases, but the Hennessey website lists a "Coming Soon" package for the 7.3L Gas Tremor. There are a few other projects worth mentioning here. First, the name Velociraptor 700 originally belongs to an F-150 that came out in 2016. Second, the Goliath 700 range of similar output is based on either the Chevy Silverado or its GMC counterpart.

The rig obviously sports some new wheels with bigger tires, perhaps even a mild suspension lift. But Hennessey probably wants to do much more than just supercharging and stance, as the Goliath comes with custom bumpers and accessories too. One thing is for sure: this Ford doesn't lack attitude. Just watch it arrive sideways at the test track! 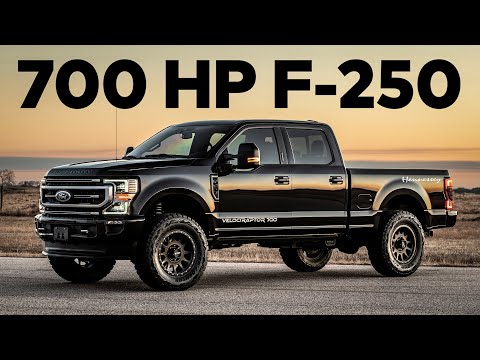