Autotrader’s Best New Cars for 2020 Include the C8 Corvette

Home > News > Tuning
Daniel Patrascu
The Jeep Gladiator is the freshest product from the iconic American off-road carmaker. Introduced at the end of 2018 as a revival of the line of pickup trucks by the same name started by Willys Motors In 1962, the new Gladiator quickly became one of the most exciting new car launches Jeep had in ages.
56 photos

As you might have guessed, the success of the new pickup quickly caught the eye of tuners across the States, who immediately set to work to create even more extreme versions of it. Among these tuners is Texas-based Hennessey, who in the final months of 2019 announced the Jeep Gladiator Maximus.

Nicknamed by its creator Badassery on 4-wheels, the Maximus is meant to be produced in very limited numbers. The initial plan was to have 24 of them made, but that target was dialed down when the tuner saw how much work goes into making a conversion such as this, and there are now just 12 of them planned.

Since the introduction of the truck at the 2019 SEMA event, Hennessey only managed to assemble three of them. This week, the fourth was announced, and immediately put on sale.

Just like all the others in the series, the Maximus is based on a Gladiator Rubicon. The stock vehicle was gutted, its engine removed, and replaced with a 6.2-liter supercharged V8 sourced from a Hellcat. After some careful tuning, the engine was linked to an 8-speed automatic transmission and it now develops 1,000 hp. That’s enough for a very impressive acceleration time of 3.9 seconds.

There are of course other modifications made to the pickup, including visual and comfort ones. Draped in black inside and out, it comes with a reimagined leather interior, and serial number badging on the interior and engine bay plaques.

The price for each of the Hennessey Jeep Gladiator Maximus is $225,000, including the base vehicle. For the record, the base Rubicon pickup, which starts at $43,875, is only a tiny fraction of that price. 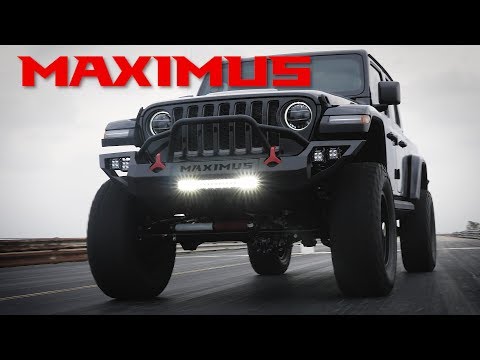