1 New TGV Trains to Enter Service in France in 2022

5 Planes, Trains and Automobiles...
Car video reviews:
Up Next

Hello Kitty is a fictional Japanese character with powers like no other: it is worth around $5 billion per year in global marketing, according to a study published in The New York Times.
6 photos

The obsession the Japanese have with the character has even engulfed public officials and companies. The latest to succumb to the Sanrio perpetual 3rd-grade student charm is transportation company West Japan Railway, which on June 30 will begin using a very special train.

Part of the 500 series, the Hello Kitty shinkansen bullet train would link the Shin-Osaka Station in Osaka Prefecture to Hakata in Fukuoka Prefecture. And to be true to the character it celebrates, it will be mostly pink.

According to Japan Times, the Hello Kitty train’s interior has tons of pink accents, as well as images of the Kitty all over the place. Even a themed photo booth would be fitted for all those wanting and willing to remember the ride in the special train.

Most of the cars of the train have names and will serve various functions. The first car of the train will be called Hello! Plaza and will have no passenger seats.

It will be used instead to promote various parts of Japan through different interiors, starting with the Shimane and Tottori prefectures from inauguration date to September 30. Other regions will follow.

For those waiting for the train, its arrival would be announced not with the usual jingle letting travelers know a train is incoming, but with the Hello Kitty theme song.

Those willing to reserve a ticket for the train will be met on the company’s website with a pink background and all sorts of ribbons attached here and there.

The photos of the train which have surfaced on Twitter mostly show the interior of the Hello Kitty. The company that created it says official pics of the rig would be released closer to the launch date. 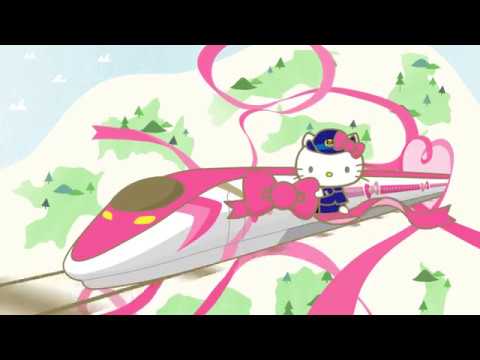