4 Ford F-150 Raptor 6x6 Gets Its Freak on With New Shoes, Looks Like an Overlanding Beast

As you’re well aware, Jeep is preparing to launch the Gladiator 4xe next year. Better late than never, a 392-engined option will be subsequently added to the lineup, according to senior brand manager Brandon Grimus.
69 photos

The problem is, even the 6.4-liter HEMI can be underwhelming for some people despite its 470 horsepower and 470 pound-feet (637 Nm) of torque. Those oh-so-demanding peeps needn’t worry because the aftermarket has got them covered with Hellcat swaps that range from wild to raving mad.

Hennessey Performance Engineering, the Sealy-based tuner that made a name for itself with high-output builds, can quench the go-faster thirst with the Maximus 1000 upgrade package. Priced at $225,000, including the bone-stock pickup, this crazy machine is no longer available to purchase because all 24 units have been spoken for. Every single one of them features the Hellcat pushrod V8 powerplant with many upgrades, including a beefed-up radiator for better cooling and high-flow fuel injectors for bigger bangs.

As the name implies, the Maximus 1000 is flexing 1,000 horsepower at the crankshaft and the kind of torque that you’d expect from a heavy-duty turbo diesel truck. 933 pound-feet (1,265 Nm) is the advertised rating, which is more than enough to smoke those 37-inch BFGoodrich rubber shoes in one fell swoop. As for the reason this ludicrous dune basher sounds like it eats Demons for breakfast, you can thank the modified blower and stainless-steel exhaust system for the heavenly (or it is hellish?) soundtrack.

Custom front and rear bumpers, a six-inch suspension lift, lots of Hennessey and Maximus branding, and leather upholstery also need to be mentioned, plus three years or 36,000 miles (57,936 kilometers) of warranty.

“There’s nothing like jumping a 1,000-horsepower Jeep over sand dunes,” said company founder and big kahuna John Hennessey. “Maximus 1000 is a very special vehicle under any driving conditions, on or off-road.” 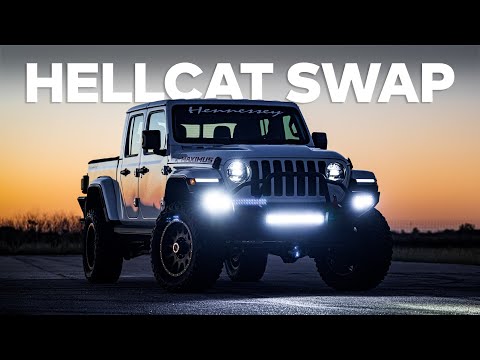