3 Crashed Dodge Durango SRT Hellcat Should Be Put to Sleep, but It’s for Sale

The video's uploader mentions that the said Durango is owned by American Muscle Performance, but that is just the tuning company responsible for its mods.

With that in mind, it does not take long to realize that the same company built a nine-second Hellcat Durango, which made headlines this August. At the time, a white Hellcat Durango owned and driven by Tina Boggess made a 9.996-second pass at the Palm Beach International Raceway. Yes, this is not a coincidence, as the example in the video is the same car.

Previously, when the said supercharged SUV was running 10-second passes at the drag strip, it was fitted with a ported blower snout, different upper and lower pulleys, a big bore throttle body, a cold air intake, bigger fuel injectors, and other mods to accommodate those mentioned above.

For comparison purposes, the quickest recorded Hellcat Durango completed the quarter-mile run in 9.996 seconds with a trap speed of 135.77 miles per hour (ca. 219 km/h), as Stellpower notes.

Initially, we noted that the video embedded below does not include an interview with the driver of the vehicle, so it is unclear if the fastest Hellcat Durango in the world is also the one showing up here. Fortunately, the owner of this Durango has identified themselves in the comments section and clarified the matter.

These quarter-mile times prove that Dodge's Hellcat Durango has great potential, and can be a 10-second car with carefully selected mods. Mind you, a 1000 horsepower Hellcat Durango exists, so that should say a few things about the capabilities of this platform. 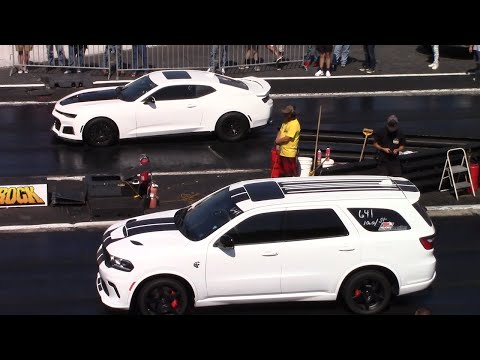 Editor's note: The story has been updated to reflect the owner of the Hellcat Durango featured in the photo gallery and in the embeded video.