1 SS Berta Is a Giant Floating Pumpkin, Because You Don’t Need Boats to Chase Dreams

4 Teenage Pilot Completes Solo Flight Around the World, Turns 17 While Breaking the Record

5 Solving a Rubik Cube in Freefall in Record Time Is One Way to Skydive as a First-Timer
Car video reviews:
Up Next

Home > News > U-turn
Razvan Calin
Australians are an original nation. They like to put a new twist on everything, including football (the American one). On the other hemisphere of our planet, spring is blooming. What better way to celebrate the new season than with a record-breaking football catch? It would be best to have a helicopter, a celebrity, and an empty stadium.
10 photos

The celebrity happens to be the former professional Australian rules footballer Brendan Fevola. On September 1, 2022, he marked a Guinness World Record. (“Mark” is the Australian definition for “catch.” Didn’t I warn you they’re original?)

The feat consists of catching a free-falling football thrown from as high up as possible. This time, the altitude was set to 728 ft (222 meters). The Australians put 14 footballs in a helicopter hovering above a football stadium to achieve the record.

Not any stadium, but the IKON Park in Melbourne, home to Fevola’s former Australian rule football team Carlton FC. Now a top-rated radio show host, the former professional athlete wasn’t a stranger to this type of record attempt.

Last year he set to break the same record of catching a diving football, but from a lower height of 650 feet (198 meters). After numerous attempts, he finally managed to get his hands on a ball.

Sadly, that wasn’t enough, with the performance falling short of the Guinness World Records rules. You can see both tries on the video at the bottom.

This year, however, the Aussie was determined to dethrone NFL superstars Rob Gronkowski and Jedd Fisch from the Guinness books. The two Americans successfully caught a ball dropped from a helicopter at 620 ft (188.9m) in April 2021 in Arizona (check the second video to watch them do it).

Backed by a lively crowd of colleagues and friends, the radio star from Melbourne put on his sports gear and went for it headfirst. After several missed tries, the Australian got hold of a football dropped from the heavens and snatched the record.

To complement Brendan Fevola's accomplishment, the ball fell out of a record-setting helicopter. The Airbus H125 is a special rotorcraft in its own right. Not only did it help set the new NFL football drop-and-catch record, but it also holds the title of the highest landing and takeoff of any helicopter in the world.

The Airbus H125 helicopter's variants have combined over 36 million flight hours worldwide. It is one of the most successful aircraft series in the world, operating for almost half a century (and sometimes breaking records). 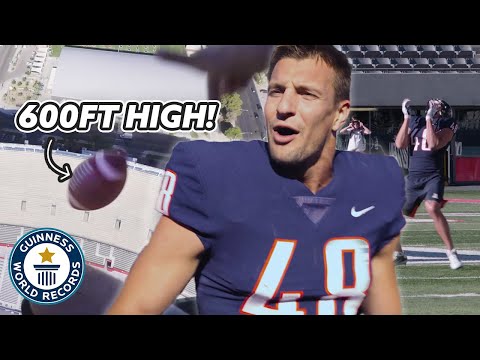