1 Jet Bike Races Ducati Streetfighter V4, You Can Guess Where This Is Going

Home > News > Moto Motorsport
Dragos Chitulescu
The Internet is being flooded with drag racing content these days. And after seeing hundreds of races featuring just cars, and sometimes cars versus motorcycles, it's time for something different. This time, two bikes are lining up for a straight-line acceleration showdown. And both are heavyweights in their way.
8 photos

Some people live their lives by the idea that bigger is better. But is it? A 600cc motorcycle may feel underpowered if you're going to carry a passenger around. A liter-bike will almost always do the job, but not everyone wants to settle for less. So the question some people are going to ask themselves is: what's the biggest, toughest motorcycle money can buy these days?

Of course, the answer is going to vary depending on what you expect that bike to be capable of doing. If going fast around a racetrack is not your number one goal, and you'd rather have the biggest engine on the market, there are several options for you. And the Triumph Rocket 3 R may just be what you're looking for. Running a 2,500cc engine, this thing is rated for 165 horsepower at 6,000 rpm.

Its engine is about half the size of the Triumph's 3-cylinder unit. The 1,262cc L-twin unit still packs a serious punch. We're talking 157 horsepower at 9,250 rpm and 95 lb-ft (129 nm) of torque. But don't be quick to judge. It may have considerably less torque than the Rocket 3 R, but it's also a lot lighter. With a dry weight of 492 lbs (223 kg), it sounds like this race should be somewhat evenly matched.

Both riders are pretty much the same weight, so it should all come down to their skills and the capabilities of the two motorcycles. They'll be going head to head down a 1-mile (1.6 km) long stretch. They're neck and neck in 1st and 2nd gear. But as soon as they shift into third, the Ducati takes the lead. Even with the Diavel 1260 S having issues in keeping the front wheel down, there's nothing the Rocket 3 can do to catch up.

Even after the riders switch bikes between themselves, the outcome is still the same. The Triumph does seem more capable when engaging in rolling starts, and that's not surprising considering its torque figures. While it runs out of revs a lot sooner than its opponent, at least it doesn't tend to wheelie while you're going all out. And it does look like it's much better at coming to a halt, as opposed to what you'd expect from such a heavy machine. 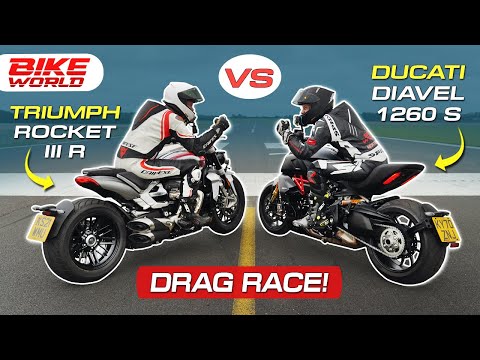