Cristian Curmei
One of the benefits of my career is the number of machines that cross through this grey matter of mine, and since I began my journey at autoevolution, travel trailers have become some of my favorites. With their ability to help us catch a different sunrise each day and connect with the natural world around us, how can we resist?
12 photos

All that brings me to Heartland RVs and their Sundance Ultra-Lite travel trailers. Now, Heartland is one of those crews whose works we've featured before, even this specific lineup. However, since last year, Heartland has been busy and has added several floorplans to its Ultra-Lite lineup, one of which is the 19HB layout.

To give you an idea of what's in store with this one, it should help to know a bit about the minds and hands behind the magic. Now, Heartland isn't the sort of crew that's been around for ages like Airstream or Winnebago, but having been around since 2003 and composed of a bunch of RV veterans, you can begin to understand what's in store. Today, this team is part of the Thor Industries family, which also has some effect on the build.

Yet, no matter how you look at the 19HB, one thing is clearly evident: it's designed to not only be a habitat that can aid you on-road, but once you've found that sweet spot on your map, this habitat opens up its proverbial arms and welcomes nature into your life. I'm specifically referring to a feature that the newer Ultra-Lite models have, a rear hatch that lifts to offer access into the trailer.

Now, it may not seem like much, but judging by the images in the gallery, this feature sits in the backdrop of the trailer's dinette, and by the look of it, this dinette is modular; take the table outside, throw up a few chairs, and voila. This also means the space can be used both for sitting around and enjoying a meal and as a bed once nighttime rolls around. You can even take things a step further and use this space as a garage for a couple of e-bikes. Bring your motocross bike if you like to sleep with the smell of gasoline in your home. By the looks of the video below, this seems possible with a couple of D-rings. Why not let Heartland know what you want to achieve with your unit, and see if they can make it happen?

Overall, this dinette area occupies only about a quarter of the unit, so the rest of what's in store is designed to fit four people. This includes a large fridge and pantry for storing foods, a galley block with two burners, space to unfurl your cooking magic, and a large sink to aid in washing veggies and used utensils.

Now, that's nice and all, but one vital space to take note of is the bathroom. Heartland knows that wet baths can be a hassle to use, so the amenities found here all sit seperate. Oh, it's not a big deal, you say? Then you probably have yet to travel with four people in a camper, and someone has a bad berry.

The remainder of the 19HB is reserved for a queen bed, overhead storage, and a large closet for clothing and other goodies. The bedding is also set up on an East/West layout, so the moment you wake up in the morning, the first thing you'll see is your spouse drooling on their pillow, but shortly after, the lush green world outside.

But what about off-grid abilities? As I dove deeper into the 19HB and what this new floorplan has to offer, I realized that this park-ready unit can also venture off the proverbial beaten path. Let's say you find some cliff edge overlooking the Pacific. Because this unit is prepped for solar as standard, unlock this ability for a few hundred bucks and sleep wherever you want as long as 44 gallons (166 liters) will last you. Worried about food? 1,099 pounds (498.5 kilograms) of cargo capacity should be more than enough to keep you fed and happy, even if most of that weight is gear.

Obviously, there's much more to this story than time will allow, but before I go, let me point out how much you're being asked to drop on a standard 19HB, no less than $41,242 (€39,200 at current exchange rates), and you can clearly see where your cash is going. Just imagine waking up one Saturday morning, getting your family or close friends together, throwing everything you need inside your 19HB, and hitting the road over that extended weekend. Sounds like a lifestyle that more and more of us seem to be considering. After all, city life isn't all that wow anyway. 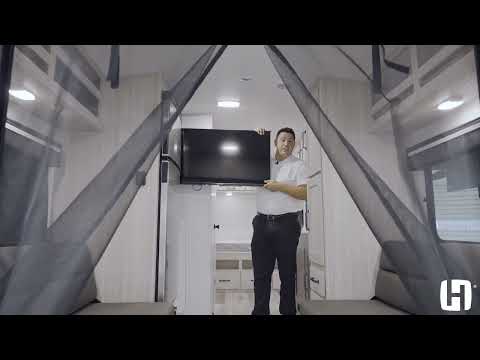 Editor's note: This article was not sponsored or supported by a third-party. Images in the galery showcase an array of Sundance Ultra-Lite exteriors.