2 NASA InSight to Die on the Job, Engulfed in Martian Quakes

5 NASA InSight Lander Peeks Into Mars Core for the First Time, Reveals Surprise
Up Next

Daniel Patrascu
Back in 2018, a special piece of equipment called InSight was sent over to Mars. Its main goal was to study the deep interior of the planet by recording marsquakes happening for whatever reasons.
8 photos

InSIght is short for Interior Exploration using Seismic Investigations, Geodesy and Heat Transport, and in the four years that it has been there it sent back close to 6,600 raw images of the region that is now its home, but also a trove of quake recordings (some 1,300 of them), including one of a magnitude 5 event that is “the biggest ever detected on another planet.”

Yet not all quakes born on Mars come from Martian causes. Some of them seem to have been caused by meteoroid impacts, as revealed in a paper published this week in Nature Geoscience by a team from Brown University.

As per the details there, in 2020 and 2021 InSight recorded seismic and acoustic waves caused by four separate impacts. They took place in May 2020, February 2021, August 2021, and September 2021, with this last one being the most spectacular, as the piece of space rock exploded in the atmosphere “into at least three shards that each left a crater behind.”

It is this one that “marks the first time an impact was confirmed as the cause of such waves,” and you can hear the thing in video below the text, at the one-minute mark, as it hits the atmosphere and then the ground in three locations.

The magnitude of the quakes caused was no higher than 2, but capturing them on tape “will be critical to refining Mars’ timeline.” That’s because, among other things, scientists use the number of impact craters on a planetary surface to approximate its age.

Sadly, we will only be able to learn more interesting stuff about Mars from InSight by looking at its past findings. The hardware is in the process of shutting down as the Martian dust covering its solar panels make it impossible to power its instruments.

Although it was initially believed the lander will die in August and September this year, the latest power readings point to it still being able to do some science until at least October, or maybe even all the way until January 2023. 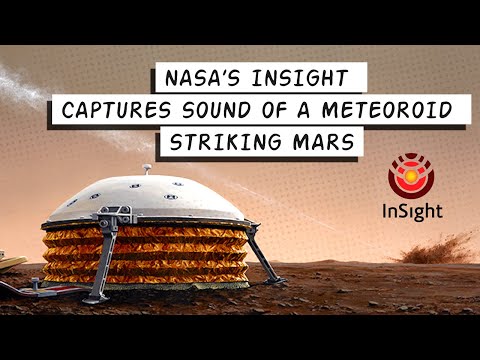