1 Jaguar Unveils All-Electric Roadster With 1,005 Horsepower, It's Just for GT7

Sebastian Toma
Gaming enthusiasts are well aware of the fact that the latest game in the Gran Turismo series has finally arrived, and it works both on the PS4 and PS5 platforms. With that in mind, one cannot help but wonder what the differences between the two console generations are when playing this game.
8 photos

Thankfully, the developers of Gran Turismo, Polyphony Digital, have decided to let users share replay data across all PlayStations, which means that you can record your gaming on a PS4 and then watch it on a PS4 Pro or PS5. Due to this possibility, the folks at Digital Foundry have devised a way to compare three consoles using the same game.

As John Linneman and Alex Battaglia have noticed, and not only them, mind you, the newer consoles have an advantage in terms of graphics. The change is visible to the naked eye, as the tracks have a more generous scenery, while the vehicles in the game have rounded edges in certain details.

Another significant difference between the PS4, PS4 Pro and PS5 while playing Gran Turismo 7, but also other games, is the fact that loading times differ. Especially in games that have large files or highly detailed graphics. Any title that you want to play might have a higher loading time on a PS4 than it would have on a PS5.

However, as the team found, frame rates have not improved dramatically throughout a generation of consoles. In other words, do not expect a PS5 to outperform a PS4 in terms of frame rate in the same game. While the PS4 might not get better graphics than the PS5 for obvious reasons, it will not run the game at a reduced frame rate.

With the latter out of the way, some console owners are probably shaking their hands in the mirror for their choice, but the frame rate thing is platform-related, rather than developer-related.

So, if you happen to own a PS4 or a PS4 Pro, the video below should help you understand the difference between it and a PS5, at least in Gran Turismo 7. Considering that aspect, we suggest getting a gaming wheel (compatible with both PS4 and PS5) instead.

Mind you, if you have Gran Turismo 7 in your PlayStation Network account on a PS4, you will get to enjoy the game on a PS4 and then pay a small fee ($10) to upgrade when you switch to a PS5. Having the game on a disc for the PS4 will allow you to perform the same upgrade, at the same price, if you get a disc version of a PS5.

With that in mind, many are inclined to wait a bit longer to upgrade to a PS5, especially if their current PS4 or PS4 Pro systems are working just fine. Those who want to jump straight to a PS5 might want to wait a bit longer due to the rise in prices that is still going on in some countries because of scalpers. 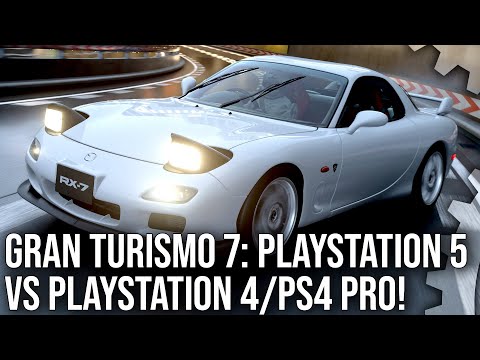