2 Maja, a Citroen Luxury Van Conversion, Aims to Show the True Side of the Vanlife Craze

5 Fiat Ducato Van Conversion Has Full Bathroom, Hydraulic Lift, 4 Beds, and a Bike Garage
Up Next

Elena Gorgan
Vanlife is not all fun and games and drool-worthy, carefully edited Instagram posts, but it’s always fun. Kieran and Alice have been living on the road full time since 2020, and they’re willing to share every detail of their experience with the community.
20 photos

Kieran and Alice are just one example of the many vanlifers who have built a very strong following online with their exploits on the road. Like those, they too built their own mobile home and documented the process, they work as content creators, which allows them to keep traveling, and are quick to share tips and tricks with whoever might be considering making the transition as well.

Unlike most vanlifers, Kieran and Alice strive to keep it real. Their Instagram feed also comes across as curated to make you feel envious, almost too nice to be true, but they’re keeping it real on YouTube. Take, for example, the video tour at the bottom of the page: that’s their current – and second – mobile home, a conversion they call Hattie the Luton.

Hattie the Luton came to replace their first van, which they took on the road in early 2020, prompted by the international health crisis and the burnout they were already feeling from their 9-to-5 desk jobs. Restrictions and working from home made them realize that they could try to work from the road, which would have finally allowed them to do what they’d always wanted but been too busy to do: travel.

With the first van, the couple traveled through Europe, to countries like France, Spain, Portugal, Scotland, Ireland, Wales and Croatia, before returning home to upgrade to a new, larger vehicle. They already had experience with the build, so turning the old Luton removal van into a home was a much smoother ride.

At the end of two months, during which time they did most of the work themselves, they had a new home, one that included some of the features the previous one lacked. As they show in the video below, these include the indoor shower cabin and extra storage, and a proper full-size kitchen.

The two travel with their two dogs, Freddie and Sookie, and as any pet owner will tell you, that can lead to some complications, especially if you live in a more compact home. Kieran and Alice opted for the solution of placing the dog beds under their own, which frees up floor space.

What differentiates a Luton van from a typical boxy removal van is the fact that the box extends over the cab. With this conversion, that space was turned into a loft where Kieran and Alice could put a mattress, but which they opt to use as extra storage for mostly random stuff. The kitchen is from Ikea, as is the foam mattress on the queen-size bed at the rear. Some cabinets are also from Ikea, but others are made custom to match.

The interior is cozy and, while messy, very practical. The two integrated a pull-out table into the frame of the bed, which means they can seat 4 people while hosting dinner parties or they can simply work side by side in comfort. The composting toilet is hidden into one of the sofa seats, and while they understand why some people would mind doing the deed in the living room, they say it works for them. They also swear the toilet doesn’t smell.

In the kitchen, they put a large sink and two-burner gas stove, with a large fridge and plenty of storage options for the pantry. Opposite the kitchen is the shower, which includes a funnel through which you can go number one if you need to, and it goes directly outside.

The roof has 720W of solar panels, with two 100aH lithium batteries, a 2000W inverter, and a battery-to-battery charger hidden in one of the wardrobes inside. In the garage under the bed, accessible through the rear door, there’s a 120-liter (31.7-gallon) tank for fresh water and a gas system that needs upgrading to something safer, which is on their next to-do list.

Hattie has a passthrough from the home to the cab, which Kieran added thinking of the pooches. It’s an old truck with some issues and lots of miles, but he swears it handles brilliantly on the road. It’s already been to Ireland on vacation, and is now in Italy, where the two are mingling with fellow vanlifers and, of course, sharing the experience with the world. 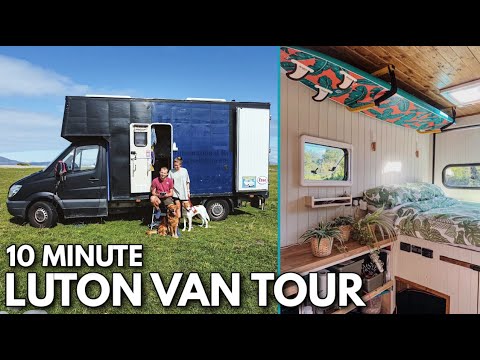