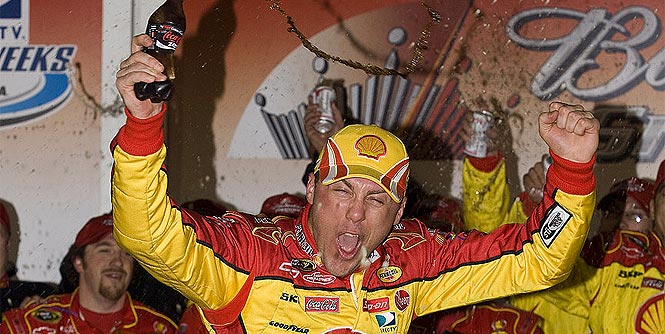 The Budweiser Shootout seems to become a family affair for the guys at Richard Childress Racing, after Kevin Harvick won the event for the second time in a row on Saturday. The RCR driver was leading the 75-lap race with 2 laps to go, when a multi-car accident brought the last caution of the day, giving him a well-deserved win in the Shootout.

Harvick had previously pitted for 2 new tires with a few laps remaining in the race, which is why he managed to climb up the pack and into the leading position when the caution was flagged.

Greg Biffle and Kasey Kahne decided to stay on the track and take the gamble of not changing any tires until the chequered flag – in order to recover track positions – but only the latter made it through. Biffle was tapped by Jeff Gordon less than 3 laps remaining into the 3rd segment of the race, causing a huge wreck that eventually ended his day.

“I was sick on Thursday and didn't even get to see a lap in the car, but this thing was a rocket, man,” said Harvick after the race, as he became only the 4th driver in NASCAR history to take back-to-back wins in the Shootout.

His illness this week caused him to miss out on the Daytona 500 practice session, with teammate Clint Bowyer replacing him and practically wrecking his primary machine during a huge pileup. Despite Carl Edwards’ dominant lead in the first 25-lap segment of the race and him not being part of the leading pack in the second segment, Harvick eventually made the most of the late laps and powered to victory.

Kasey Kahne managed to hold on to the runner-up spot, while followed by Jamie McMurray, Kyle Busch and Denny Hamlin.