Harvick Set to Remain in NASCAR With RCR 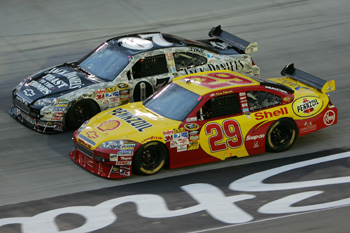 One of NASCAR's most experienced drivers confirmed on Monday he will remain with his Richard Childress Racing (RCR) team next year as well, despite an almost disastrous season.

Kevin Harvick is currently having his worst season ever in the NASCAR Sprint Cup Series. The American driver resides on the 24th spot in the championship standings with his best performance of the year so far being a second place in the season's opener in Daytona.

Specullations were made about the 33-year-old wanting to depart from the RCR team, but his team dispelled those rumors announcing Kevin's 2010 contract.

"Rumours about Kevin not driving for RCR next season have been flying around the garage area and in the media. We want to put the rumours behind us by stating together that Kevin will drive RCR's #29 Shell-Pennzoil Chevrolet Impala SS for the 2010 NASCAR Sprint Cup Series season," said Richard Childress, RCR team owner.

"RCR continues to work on the overall performance of the #29 team, like we are with all of our teams, and the plan is to end the season on a high note. Kevin and the #29 team are also preparing for next season with the goal of making a run at the 2010 NASCAR Sprint Cup Series championship," continued Childress.

The two-time Nationwide Series champion spent nine season at the wheel of the #29 car and is set to achieve a top result with his RCR team next season, meaning he looks on working hard with his crew to improve their vehicle.

"While the 2009 season has not been what any of us have wanted, Richard and I are both committed to improving the performance of the #29 Shell-Pennzoil team for the remainder of this year and the 2010 season," declared Kevin Harvick.