Harley-Davidson Street Glide Hides Chrome Under Paint, Everything Else Under Custom Job

About four years ago, the European custom motorcycle scene started to get acquainted with a French Harley-Davidson specialist going by the name Melk. This crew stepped into the industry's spotlight back then thanks to the creation we have here, a 2015 Street Glide turned into something that is now known as the Melk No. 1.
9 photos

Melk describes itself mainly as paint specialists, and they’ve been at it for a while now, creating some incredible projects over the years. The Street Glide however was the first time they ventured to go for a full custom, and the result is not half bad.

The attention to detail of the established paint specialists is visible pretty much everywhere on this project. Three colors were used for the custom, namely metallic grey, red and vivid black, spread in various combinations all over the body of the motorcycle.

Black is the most present, being abundantly used on anything from the front indicators to the taillights. In fact, it was even sprayed on all the originally-chrome bits of the motorcycle, down to the front fork and various covers.

The saddlebags, fuel tank and front fairing, on the other hand, include all three colors, with the tank receiving special attention through hand-made lettering spelling the name of the original bike's maker.

Given how this was the shop’s first full custom, it didn’t limit itself only to the paint job. The bike also received a Stage 1 upgrade, Vance & Hines exhaust, a Screamin’ Eagle case, and Performance Machine ai filter and shifter, among others.

Despite being four years old, the Street Glide still looks elegant enough for today’s roads, and probably Melk could replicate it on the two-wheelers of further customers as well. But to find out how much such a thing would cost, you’d have to contact the French garage. 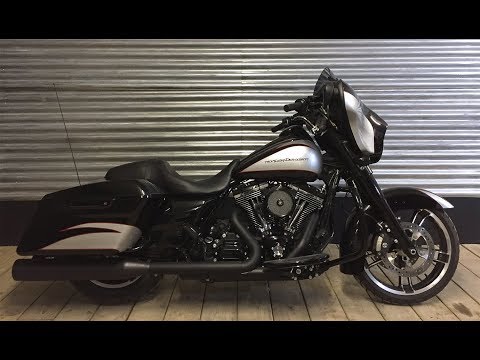