3 Douchebag Rider Slams Into Guardrail, Others Crash Into Him

Harley-Davidson Cruisers Crashing In a Ditch At Insanely Low Speed

Gabriel Brindusescu
Thinking that riding chill on a massive Harley-Davidson cruiser will keep you safe during your ride won’t help much if your skills are bad. Or you are drunk... or whatever happens in this crazy video.
1 photo
So, there’s this group of riders having fun up the mountains and at some point, for apparently no reason, one of the riders on a big cruiser ahead does something wrong and tips over to the right in the ditch, despite the low speed.

Just one second after, the other rider also on an H-D cruiser point fixates on the crashed guy and follows him into the pit in a silly way. Both motorcycles remain bottoms-up while the two riders and the passenger climb and analyze what happened.

Fortunately, no one got hurt, but those cruisers could have lost their fluids while staying upside down, so tipping them back the right side down and continuing the trip is surely not an option.

Now, I’m no forensic detective, but I might say the first guy crashed due to a combination of poor riding skills, the incline on that bend as well as a patch of sand near the apex (you can see it clearly at the 1:20 mark in the video) that probably scared and forced him to go out into the scenery.

As for the guy riding ahead on a similar bike, he noticed what happened to his friend, turned his head around to look at him and then, you know... the bike goes where you are looking.

Although we feel sorry for their screwed up trip, we can’t stop laughing at the moment the first bike rolls off the road instantly followed by the second one. It’s like watching some cow-tipping action.

Anyway, we hope the two will learn something from this experience and hone their skills for future rides. 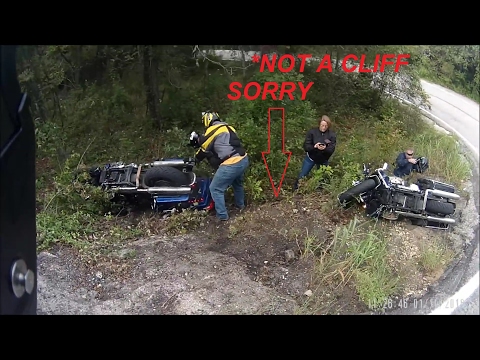