1 Domek Is a Spectacular Custom Tiny Home With 3 Lofts, Atrium Shower, and No Compromises

5 Helga Tiny House Is How You Turn an Old Horse Box Into a Gorgeous Rustic Home
Car video reviews:
Coverstory

Hand-Built Home Sits on Top of a Car, Comes With Touching Story and Real Safety Issues

You do whatever you have to do to survive. For many people hit by the housing crisis and financial turmoil, this means living out of a car or making a home out of whatever space is available. The same goes for Terry Gonzalez.

Terry Gonzalez lives in the Austin area, Texas, moving around. He doesn't live out of his car but on top of it because he built a sort of shack up top. It's a mobile home made of pallets on top of a steel frame precariously affixed to the roof of the car – the kind of improvisation held together with elastic chords, tape, and invisible magic.

Speaking to Fox7 Austin, Gonzalez says his mobile home, which has become somewhat of a local and online celebrity, was inspired by tragedy. A “life gives you lemons” story. That’s the angle of the video story at the bottom of the page: a man’s tale of tragedy spun into a positive one through ingenuity and hard work.

First things first: Gonzalez says from the start that he is homeless. The previous (actual) home he lived in burned down just as he was remodeling it. He believes the owners had set it on fire, but he doesn’t say why that might be, not that it mattered, because he still lost everything he had in the blaze. To add insult to injury, his truck and trailer were towed, and he lost all his tools.

Gonzalez lived out of his beat-up daily for a while, but at some point, he wanted more space so his pet dog and cat could sleep in the car, and he had room for himself. He couldn’t say whether he specifically set out to build a home on top of the Oldsmobile Alero, but it was probably more of a spur-of-the-moment type of thing. “How I ever thought of this I’ll never know, until I saw that metal frame sitting over there, and I said to myself ‘that looks like that will fit on top of my car,'” he tells the media outlet.

Every bit of material he used is trash or, as they say, today, upcycled, repurposed stuff. The contraption looks the part, though the interviewer stresses that everything on it is “functional.” A casual glance reveals anything from a refrigerator to an AC unit strapped on the sides, an office chair, a supermarket cart, a couple of bicycles, a sheltered area, and even some gardening tools. For a fancier touch, Gonzalez added a pair of new “chandeliers,” and he’s considering adding a skylight next. This is a work-in project, but, again, it doesn't look as if there's a plan for it.

The most striking part about this build isn’t that it exists. After all, shacks of this type have been popping up across the U.S. (and the news) a lot lately, on residential streets where homelessness has spiked.

The most striking part is that this thing moves and, more importantly, that it’s not getting attention from the police. Well, according to Gonzalez, it does get attention, just not the kind you’d imagine: even though it poses serious safety issues, he says police only pull him over to ask him about the hand-built mobile home and not to give him citations.

No wonder then that the story has proven a hot topic with online audiences. Indeed, Gonzalez’s situation is tragic, and yes, he did turn it into a positive note. At the same time, though, this thing is a hazard, both to himself and other traffic participants. There is a reason why there are laws on what you can or can’t strap onto your car, how heavy that stuff can be, and how it should go up on the vehicle. Anything that adds weight to the vehicle will impact the vehicle’s braking distance, and anything that’s not secured correctly can move around in case of sudden braking or a collision.

Gonzalez’s hand-built “mobile home” is a sad sign of our times and, to a great extent, a touching story about human resilience and ingenuity. Obviously, the man is not “guilty” of trying to make the most out of an awful situation, and he probably doesn’t even realize how dangerous it is to drives this thing around.

But it is a serious hazard, even if he only drives it every couple of months to move it from location to location, and more so if you consider the "Poor" safety rating the Alero got from the IIHS. You’d think the police would be the first to notice it. 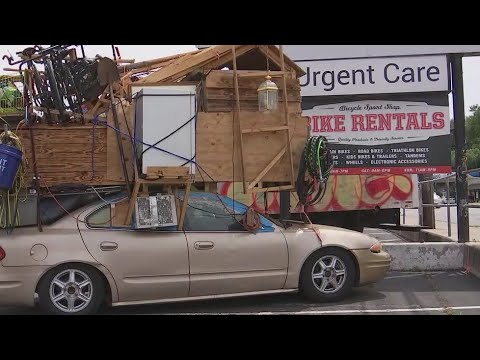