1 Meet the Drone Delivery Capital of the World, Where Your Cup of Joe Comes From the Sky

5 This Hybrid Drone Can Fly More Than Three Hours With One Fuel Tank
Car video reviews:
Up Next

The Commercial UAV Expo Americas is one of the most important events in the drone industry, having first dibs on all the breakthroughs and releases in the field. This year’s edition brought some really cool UAS (unmanned aircraft systems) in the spotlight and the Hammerhead eV20 is one of them.
6 photos

The eV20 is a delivery drone developed by Airlogix, a company headquartered in Delaware, which also has a research and development center in Ukraine. Its new VTOL (vertical takeoff and landing) is an electric drone propelled by four tilt electric motors with a maximum thrust of 104 lb (47 kg) each.

Airlogix claims the capacity and range of its Hammerhead eV20 are among its most appreciated features, considering that the drone has a fully electrical engine. It also added that its eVTOL has managed to attract attention especially among industrial and farming companies, with its capabilities recommending it as a great working tool for logistics.

The potential of the eV20’s luggage compartment was also tested via a funny experiment in which Boston Dynamics’ famous Spot robot dog was turned into cargo and transported by the drone.

Hammerhead’s awareness system consists of a set of navigation lights, a LiDAR ground altimeter, and a sensor for precision landing on special platforms.

For now, Airlogix doesn’t want to reveal anything else about the Hammerhead eV20, except for the fact that it plans to move to a full-size model test and then to serial production as soon as possible. We’ll follow up with updates. 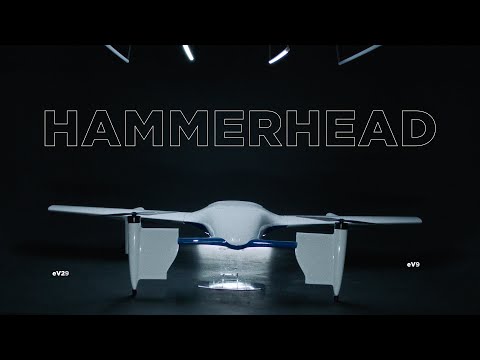