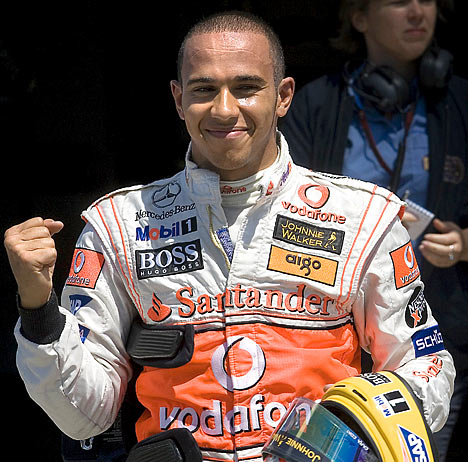 Lewis Hamilton won pole position for the Italian Grand Prix on Saturday, after dominating the Monza qualifying from beginning to end. The reigning F1 champion passed Force India's Adrian Sutil in the last seconds of the Q3 - by only 0.195 - to score his second pole position of the season, with the best time of 1:24.066.

Third overall was Ferrari's Kimi Raikkonen - almost half of second off pace - ahead of McLaren's Heikki Kovalainen. Rubens Barrichello had to settle for the 4th best time of the Saturday qualifying, ahead of teammate and championship leader Jenson Button.

Force India had a splendid Saturday at Monza, as the Silverstone based outfit managed to get both its drivers into Q3. Newly-signed race driver Vitantonio Liuzzi scored the 7th best time of the afternoon, ahead of Renault's Fernando Alonso and the two Red Bull drivers Sebastian Vettel and Mark Webber.

Renault's Romain Grosjean made some rookie mistakes during his late run in Q2 and was unable to join his teammate in the Top 10, having to settle for the 12th best time, behind Toyota's Jarno Trulli.

BMW's Nick Heidfeld and Robert Kubica encountered engine problems in the first part of Q2, as they both had to stall their cars on the side of the track. The two are likely to start the Sunday race from the rear of the pack, as part of FIA's engine-change rule (grid demotion for drivers who change their engines or gearbox between the qualifying and race). Kubica eventually scored the 13th best time, while Heidfeld had to settle for the 15th place.

Giancarlo Fisichella didn't have a very successful outing at the Monza track on Saturday either. Although he didn't make any big mistakes at the wheel of his Ferrari F60, Fisico found it hard to adjust to the his new KERS-powered car and eventually finished the day with the 14th best time.

Toyota's Timo Glock was unable to follow his teammate into Q2, as his late efforts in Q1 only got him a 16th place on the timing sheets.

Neither of the two Williams drivers managed to pass the Q1, with Nakajima and Rosberg finishing on some disappointing 17th and 18th place respectively. Sebastien Buemi - who was involved in a blocking incident with Hamilton in the late stages of Q1 - and Jaime Alguersuari recorded the poorest lap times on Saturday.