4 The Hummer H1 Lives On As The Humvee C-Series

The media is all Hummer this and Hummer that these days, as the nameplate is making a comeback as a fully electric member of the GMC family. But we feel it's always important to honor your ancestors, especially that grandpa that put the business on the map. We're talking about the H1, of course.
5 photos

Now, the H2 and H3 aren't as bad as some people say, certainly not inferior to the other trucks and SUVs General Motors was making in that era. However, they could never fill the shoes of the H1.

That's because the original Hummer came out of military service. However, you'd never be able to tell just by looking at this particular model, which has been heavily customized.

Now, customizing military vehicles is nothing new. That's how the whole Harley-Davidson scene started - making choppers out of army surplus bikes. Heck, this Hummer is probably less of outrage, as decades have passed since it left the army life.

But just like the chopper gangs, the stripped out H1 is here to cause a little trouble. For context, the Hummer owner here is being asked to leave the parking lot which he entered over the curb, and he does it the same way he came in, which makes those massive wheels seem even weirder.

As you have probably noticed already, the Hummer doesn't have its doors, roof, and rear cover. You see this a lot with custom Jeeps, and it's often referred to as "going naked." Owners even have events called "riding the trail naked," which sounds more repugnant than it actually is.

Anyway, if there's ever an SUV that can pull off gold 30-inch wheels, it would have to be the massive H1. They would almost seem normal were it not for the skinny rubber. Oh, and the red leather and sound system seem straight out of a Pimp My Ride video. 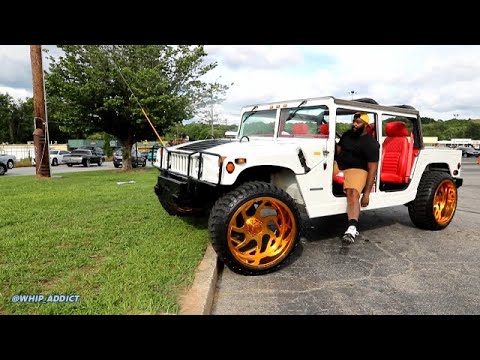