4 From Goodwood FoS to Gymkhana, Travis Pastrana's 862-HP ‘Huckster’ Will Cover All

Dragos Chitulescu
A few days ago I received an email that was informing me about the upcoming Gymkhana 2022 film. At that point, we provided you with some pre-launch information and a short teaser, and we all knew this was going to be one epic adventure. It feels amazing that every couple of years, Ken Block's team comes up with a way to make things even more insane than they were before. But after watching Gymkhana 2022, all we can say is All Hail Travis Pastrana!
16 photos

While you'll get the gist of it by looking at the official photos from the shoot, watching the video will do a much better job of painting the whole picture. You'll be on the edge of your seat for 10 minutes, and chances are you'll need to watch it twice just to make sure it's all real.

Seeing how far the Gymkhana series has gone from its early phases is incredible, and you can imagine that there was quite a bit of effort put into it. The video starts and ends with Pastrana's Florida base jump, and you're probably aware by now that he ended up in the ER by the time this was over.

But judging by what goes on in the video, that could have happened multiple times. Still, it all clicked together thanks to meticulous planning and the remarkable skills of all actors involved in the scenes.

Travis Pastrana is slowly, but steadily becoming a sort of modern-day Evel Knievel, and that guy had over 20 crashes during his stunting career. Going where no man has ever gone before comes with a risk, and Pastrana was brave enough to overcome his fears and deliver what may be the world's greatest automotive video for at least the next year or so.

The action kicks off on the beach, where the "Florida Man" is resting before his upcoming adventure. We've all seen Pastrana going sideways at ridiculous speeds before, but we were mostly waiting to see what kind of special stunts he'd be pulling off by the end of the video.

For his first trick of the day, it looks like he's performing what a skateboarder would call a 50-50 grind. We would have never expected to see someone pulling that off by using a car, but then again that's what makes the Gymkhana series so special.

Up next, it's the classic doing-donuts-around-a-moving-object trick, and the moving object happens to be the kind of contraption that will always make the headlines somewhere. That's right, you're looking at a PWC that has been converted into a scooter, and you might remember seeing one pulled over by the police on the Interstate in Pennsylvania last year.

The moment you see Ryan Anderson waiting for Travis in the Son-Uva Digger, you know the heat is about to go up a notch. We can't remember ever seeing anything like it, but we won't spoil the fun for you.

Gymkhana 2022 has got all the ingredients of a viral video, so there are more cameos to look out for. The Hoonigans have been putting out a lot of drag racing content in the past few years, so it comes as no surprise that they included this kind of a challenge in their newest flick.

This time, the 862-HP Huckster is going up against Cleetus McFarland's 3,000-hp "Mullet" El Camino. Pastrana then goes on to hit speeds of over 160 mph (257 kph), while you can see a fighter jet matching his pace through the side window.

Pastrana's rallying experience came in handy for the next stunt. Jumping that long is spectacular to see indeed, and you'll only witness similar levels of madness in certain WRC stages. Hollywood should be paying attention to his next trick, one that involves a bridge and a helicopter.

This kind of action makes 2 Fast 2 Furious almost look like child's play. There's still more to come, and all we can say is that you'd best stick around until the very end, as you'll get to see a funny intro for Subaru's newest creation. 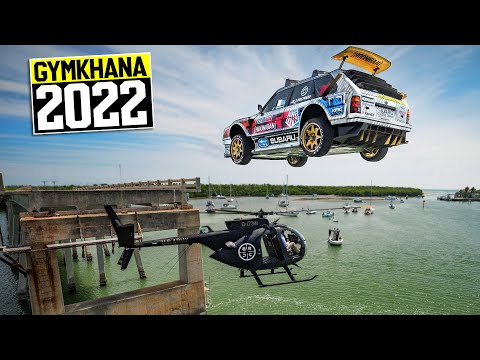