2 Tuned Pontiac Trans-Am Drag Races Ferrari 488 Pista, This Can Only Go One Way

Mihnea Radu
Travis Pastrana's Subaru STI was seen by tens of millions performing impossible drifting stunts in Gymkhana 2020. However, it doesn't act like a big shot and finds time in its schedule for some ordinary drag races against a Corvette.
4 photos

Compared to jumping over a speed boat or performing tandem stunts next to an airplane, drag racing must feel like a walk in the park for a decorated driver like Pastrana. However, the Hoonigan team couldn't let his Subaru get away without performing some donuts and high-speed jumps.

This may look like your average $45,000 sports sedan rolling off the Subaru lot from a distance. And it does indeed have some stock elements in the frame, but the rest of it is built totally without restrictions.

There is so much aero at the front, all made from carbon fiber. When building the Gymkhana STI, Subaru called on the help of specialist Vermont SportsCar. Under the hood, they placed a 2.3-liter boxer engine with a complex turbo setup that's pushing 50 psi. It's an 862-horsepower rocket, and while the four-wheel drive is normally used for slides, it can help put the power down.

Its rival couldn't be more basic, yet it's kind of scary. If somebody can beat the current Gymkhana car with some random Corvette build, the drag racing world will come to an end.

That somebody is Cleetus McFarland, a YouTuber with 2.62 million subscribers. Unless we're mistaken, the twin-turbo late-model El Camino we showed you a few hours ago is also his. So it's fair to say he knows a thing or two about quarter-mile speed and Detroit V8s.

Today's weapon of choice is a C5 with pop-up headlights, a 2000 model. It's got an iron-block engine that somehow holds up when 850 horsepower is delivered. The T56 manual gearbox is as average as they come, contrasting with the sequential unit in the drifting Subaru. But let's see how much that matters.

As expected, the 'Vette struggles for traction off the line and loses the first race. So the Hoonigan crew decide to cheat and allow it to do a rolling start the second time. And somehow, the C5 is made to look like the winner. 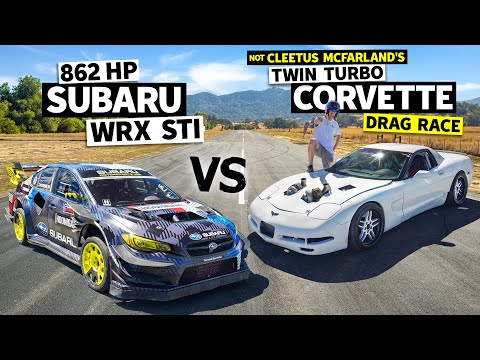