1 This Nissan Camper Van Has a Li-Ion Battery, but It's Not What You Think

5 Compact Thor Delano RV Grows in Size When Parked to Sleep Five People in Comfort
Car video reviews:
Up Next

Russian Cosmonauts Leaving the ISS in 2024 Is a Bigger Deal Than You Think, Here’s Why

If family-oriented van designs aren’t your thing, and if the bells and whistles of the most stylish vans don’t make your heart sing, you need to check out this guy’s DIY home on wheels. You’ll see nothing but pure functionality and common sense solutions, all wrapped into a super fun adventure-ready van.

For those who don’t normally explore every nook and cranny of the “van life” world, a T1N (Transporter 1 Neu) Sprinter is not a very common choice for van rebuilds. It was built from 1994 to 2006 and first arrived in the U.S. as a Freightliner. Later on, it would continue to sell here under the Freightliner (cargo version) and Dodge (passenger version) nameplates.

But Ikey Baker saw its potential, and he wasn’t wrong. The turning point for him was about two years ago when, instead of going to college, he decided to work full-time at a van building company while also working on his own van. The precious experience that he gained in such a short time was put to good use when he created Patience, his current home on wheels.

It took three months just to get Patience looking good again. After getting rid of the rust, doing some welding, and painting the exterior, it was time to turn the 2006 T1N Sprinter into a home. Ikey didn’t mind the extra work because he knew he wanted “an old van” that would be reliable and more affordable. A recent full tour presented on Nate Murphy’s channel lets us take a closer look at the unique layout of this DIY project.

First of all, a wall with a sliding door separates the driver’s cabin from the rest of the van. Add to that the fact that there’s a green wall at the back of the van, with the garage on the outside, and you’ve got a compact space that feels more like a room instead of being inside a vehicle. It’s also insulated as best as possible in any season because Ikey loves to go skiing as much as he loves riding on his mountain bike.

An eight-inch layer of reflective foam keeps the inside at the right temperature, while an underbody fan brings in fresh air from underneath the van, instead of the air on the sides of the vehicle which would be warmer. This fan is monitored via a control panel that also helps manage the water gauge, battery monitor, and onboard air compressor.

The insulated foam is glued to the back of the wood panels that cover most of the cabin walls, which look nice due to the contrast between the black painted plywood and the Baltic birch plywood slats.

The bedroom/living area is one of the most creative ones we’ve seen inside a mobile home due to the layered structure that truly makes the most of the available space. Ikey wanted to have enough room to hang out with a few people, and the modular seating arrangement looks perfect for that.

Underneath, the pop-out storage compartments are used for personal stuff, such as clothing, and underneath those is where most of the van’s systems are located, like the AC/DC distribution panel and the water heater. This was Ikey’s clever solution for maximizing space while also keeping everything tucked away so that the area can double as a lounging spot. Even the toilet is perfectly disguised in the same area, with no additional space needed for a separate bathroom.

At night, a Murphy bed is easily dropped down, while a heater (also cleverly hidden) keeps the temperature nice and cozy. The green wall is another one of this van’s unique features because it turns into a small outside deck. Because of the garage at the back of the vehicle, there was no opening to the outside. So, the ingenious owner integrated this flexible deck that creates a fun outdoor/indoor space.

You can’t have a “man cave on wheels” without a lot of adventure toys and gear, and Patience is no exception. Learning from previous experiences, Ikey opted for a rack, which he finds more practical compared to conventional solutions. This way, he has enough room for all of his toys, and they’re also easy to reach.

Last but not least, the kitchen at the front of the van is just as practical as everything else inside while still looking uncluttered and well integrated within the overall layout. It fits a fridge, a propane stove, and a microwave, in addition to the cabinets for a small storage unit.

All in all, Patience looks like the dream home on wheels for any guy with a passion for the outdoors and for sports. That’s what building your own perfect home truly looks like. And it’s sure to inspire others to go for their dreams as well. 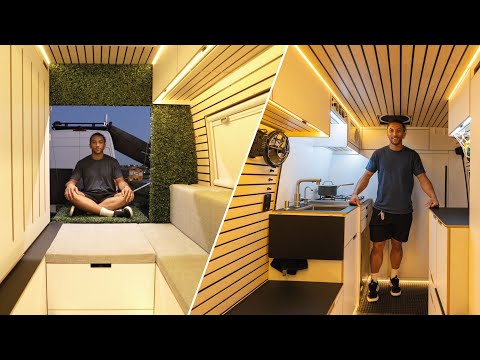