4 Chris Harris Will Still Have An Online Show, It Will Be On Top Gear

Alfa Romeo Has Another Giulia Card Up Its Sleeves - The GTA

Almost everyone who buys a rear-wheel-drive sports car does it thinking that, at some point, they're going to drift the hell out of their vehicle. If said car also happens to have a few added "aerodynamic" elements to its body, then you can substitute that "almost" with "absolutely."
5 photos

The thing with drifting is that you have to be good at it to do it reliably, and that can only be achieved by practice. But where? Luckily, the people who built the roads took care of that and provided Ken Block wannabes with the perfect venue. Most people call them 'roundabouts,' but we know them by their true name: drifting rings.

Those who lack the skill to turn their cars sideways in normal conditions often wait for the asphalt to get wet, and then come out to play. The thin layer of water on the road surface makes it a lot easier to lose grip, meaning drifts can be initiated and maintained with less effort.

Let's take a short break and head over to our weatherman reporting from Hong Kong. It seems like the Chinese province is dealing with the Haima Typhoon which brought heave rainfall and gale-force winds. Most of the city streets are flooded as the sewage system could not handle the large quantities of water over such a short period. People are instructed to stay indoors as one the same typhoon left eight dead in the Philippines the day ahead.

Alright, back to our aspiring racing drivers. So the news of incoming rain seems to have convinced these two undoubtedly young fellows to take out their modded white sports cars and head over to a less frequented roundabout. Once there, it was time to drift.

Only it didn't quite work as planned. You see, getting the rear of the car to go sideways is great when there's a thin layer of water on the ground, but when there are literally tons of it, it's a lot more difficult. That's because the lateral movement of the wheel has to push that water aside, which is effectively acting as a brake.

Luckily for them, the roundabout they chose had a small area where the water wasn't so deep, so they did manage to get the rear sliding, but not much else. You can see the two stopping for a chat at the end, with the one who had just finished spinning probably telling the other: "I don't know, I think there's not enough water in this roundabout. Let's go looking for another one."

It's easy to know whether the water on the road will help you drift or not: if you don't know how to swim and you'd be afraid to get out of the car without a life jacket, then it's probably too much. 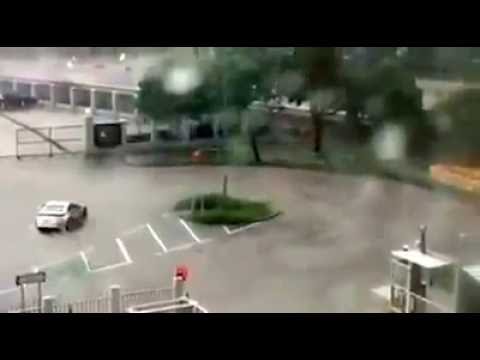