1 Astronauts on the Space Station Held Their Own Olympics, Had Some Unique Games

2 Female Cyclist Breaks World Record, Cycles the Length of the U.K. in 51 Hours

5 Marin Bikes Answers the e-MTB Call With the Capable Alpine Trail E1 and E2
Car video reviews:
Up Next

Pinkbike’s presenter Tom Bradshaw is a born explorer and sports enthusiast. He also likes to push his limits and see how far he can go. Just like in this case, when he decides to ride 100 mountain bike trails on a single, hot day, at 108 F degrees (42.3 Celsius).
6 photos

Well, to be fair, not an entire day, but from dusk ‘till dawn, meaning approximately 15 hours of daylight. It all happened in British Columbia, in the Cumberland Forest on Vancouver Island. Why there? Because there is a large network of superb MTB trails, more than 170 in total, to be explored.

With this being a colossal challenge to tackle on your own, Bradshaw had some help in planning his course. Canadian cross-country mountain biker Max Plaxton, who also participated in the 2012 Olympics, and Jeremy Grasby, founder of the United Riders of Cumberland non-profit organization, were his two sidekicks.

Tom’s course was 77.6 miles (125 km) long, with more than 9,842 ft (3,000 m) of climbing. In order to succeed in such a grueling project, you need to head back to basecamp every now and then for refueling, and Tom’s version of it was a small, 16-ft Airstream trailer that he brought from the mainland via ferry.

The epic ride ended in the evening, at 9:25 pm, when Bradshaw made it back to basecamp and called it a day. Numbers showed he was close but not quite there, with only 83 trails ridden in total, meaning 60.8 miles (98 km) and 10,170 ft (3,100 m) climbed. An impressive result nevertheless if you ask us, given the weather conditions. 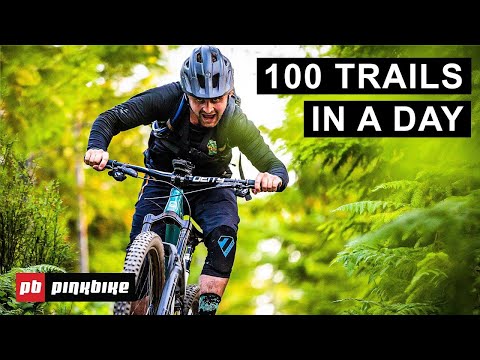