Guy Pranks Car Industry Officials at Detroit, Telling them Someone Scratched Their Cars

There’s a new app going around that is most definitely not on any gearhead’s ‘must have’ list. Its name is ‘Dude, Your Car!’ and basically allows cold-hearted so-called friends to prank you and make you believe that someone dented or scratched your car.
1 photo
The way it works is very simple. You take a picture of the car and then apply a type of damage of your choosing, modifying it in the app. When you show it to your friend or enemy, if he’s a gearhead he’s most likely gonna lose it and never talk to you again.

When this is played between friends, it’s all fun and games as not much can happen but when someone uses this app at the 2015 Detroit Auto Show and pranks various officials into believing someone dented or scratched their cars, it might not be as funny as you think.

The reactions are hilarious though and most people freak out immediately when they see Dennis Roady telling them that some villain dared touch their precious automobile.

The cars he chose are not exactly cheap either. Starting off with a very expensive Maybach he then goes through a Jaguar F-Type and an Audi R8. To get a better clue of the range of cars he targeted, bear in mind that the cheapest one is a Dodge Challenger T/A that had some officials mutter out some not too flattering words.

While it’s not all that great to laugh at other people’s expense, we have to admit that the relieved faces they make when they find out it’s just a prank are worth it. Just check out the video below to see for yourself. 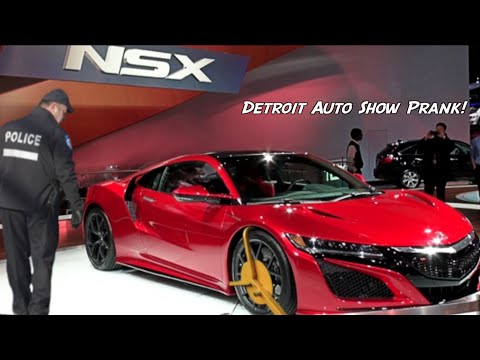