A New Segment Is Created: First Bentley Bentayga Rolls Off the Production Line

Not to say that driving a Bugatti Veyron implies some smooth electric jazz tune or perhaps even some classic music, but AC/DC’s You Shook Me All Night Long rather sounds like an off-road car type of song. Perhaps it’s a matter of preferences, but this guy clearly is a fan of the famous Australian rock band, considering he was able to keep playing his acoustic guitar while the hypercar was in launch control.
1 photo
When engineers worked their magic creating the fastest production car on the planet (that’s until the Chiron gets out, most likely) they also added the launch control feature. Sure, for a hypercar that produces a maximum output of 1200 PS at 6400 rpm and a maximum torque of 1100 lb-ft (1500 Nm) at 3000-5000 rpm, this is more like a must than a choice. The software controls acceleration based on engine specifications to make the vehicle accelerate smoothly, yet as fast as possible.

Naturally, the Bugatti Veyron is far from being the only model in the industry to use this feature, but considering its performance, it does make the passenger scream of joy when the driver uses it. Screaming was pretty much what this fellow did while singing AC/DC’s big hit the other day, at a gadget fair in Amsterdam, the Netherlands.

The joyride was, in fact, part of a small competition that saw the winner ride in the Bugatti Veyron Vitesse that is traveling around Europe with the 2Fast Touzani Tour. The campaign is financed by Trust International, an electronics company based in the Netherlands. It sees Dutch soccer freestyler Soufiane Touzani traveling with this gorgeous hypercar as they show up in several cities to present their skills.

The guy with the guitar was challenged to play his instrument while the driver of the Bugatti would hit the pedal to the metal. Succeeding brought him a Trust power bank, although some petrolheads would argue that the actual prize was the ride itself. 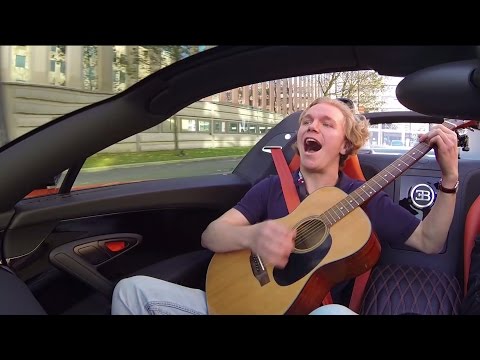