Watch Out Spot, There's a New Robot Dog in Town and It's Getting Smarter

Guy Makes a Wireless Remote Using a Nintendo Zapper; Can Turn On His Drill Press

Messing around with electronics is fun and can boost your creativity, especially when you’re trying to impress your nephew. Take this guy for instance, who turned an old NES Zapper gun into a wireless remote that can turn on lights, a drill press, and more.
6 photos

If you’re a Nintendo fan, preferably an older one, you surely know a thing or two about the NES (Nintendo Entertainment System) Zapper. It was a popular light gun accessory released for Nintendo in the 80s. Turns out that with a little imagination and solid engineering skills, you can do more than hunt and shoot ducks with this gaming gun. You can also modify it to turn it into a wireless remote.

DuctTape Mechanic posted a video on his YouTube channel showing exactly how he did that, and what applications this remote can have. In his case, he proved useful to turn on lights, his fan, and even his drill press. He claims the remote works at distances greater than 100 feet (30 meters).

His NES Zapper was a used one, purchased for no more than $5. For the device to be turned into a wireless remote, DuctTape Mechanic had to open it and install an RF transmitter module in it, soldering the wires from it to the switch of the Zapper. He, of course, had to first remove all the preexisting wiring.

As far as the receiver part went, he interfaced it with an Arduino board, using a PC817 optocoupler.

We’re not going to bore you with all the techy steps, you can just watch the video for that. And as far as we’re concerned, there was a lot of work involved for the whole project to come to fruition. It’s definitely easier to just turn on the darn appliances yourself than put yourself through all that tedious process. But nevertheless, the YouTuber nailed it, and it’s at least fun to watch the result. 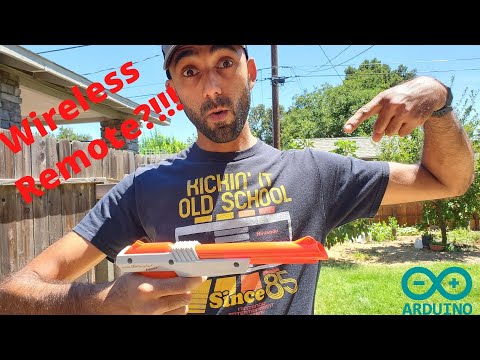