5 2020 Mercedes Sprinter Off-Grid Campervan Was Custom-Built for the Nomad Adventurer In You
Car video reviews:
Up Next

Guy Gets Creative With a Ford Transit Connect, Turns It Into a Budget-Friendly Camper Van

There’s only so much you can fit into a Ford Transit Connect, which might not be people’s first choice when it comes to van conversions. But this guy managed to turn it into a practical weekender/road trip camper van for under $6,000.
7 photos

Initially used as a cargo van, the 2011 Ford Transit Connect used as a base by Outpost 33 was not meant to serve as a camper for full-time living, but rather for weekend trips with his wife, as they both love the outdoors. It is why the main priorities were to make it comfortable to sleep in, equip it properly to be able to store as much stuff in it and keep everything simple and budget-friendly.

Outpost 33 turned the back of the van into a small bedroom. He fit in a bench with cushions for lounging, and he covered the metal sides of the vehicle with wood, to give it a cozier feel. A privacy curtain separates the driver’s cab from the sleeping area. The great thing about the bench is the fact that it is low enough so you can sit without slouching or hitting your head on the ceiling and it's a fold-out, so it extends into a full-size bed.

There are plenty of wooden storage boxes in the van, including underneath the bench/bed, where the owners carry camping gear, supplies, clothes, and other essentials.

For the floor of the Ford Transit camper van, Outpost 33 used a single piece of plywood covered in vinyl, which makes it easier to clean. The van came with metal grates on the windows, which were kept for safety reasons but also to be used for mounting additional curtains for more privacy.

This DIY van conversion was a two-week project that cost the married couple less than $6,000. 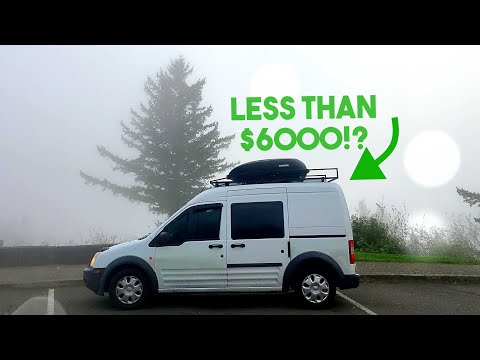